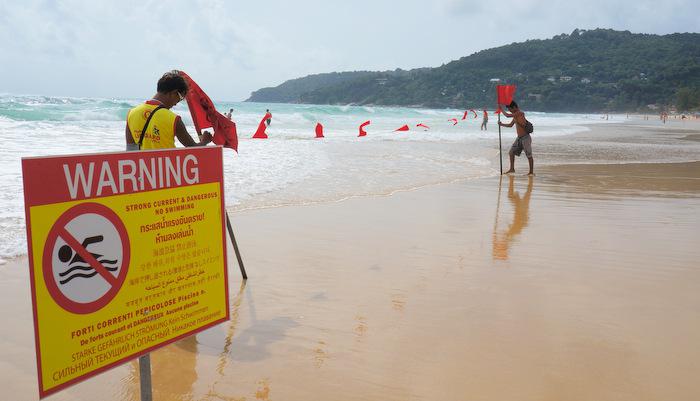 PHUKET: The president of the island’s lifeguard club is threatening to slash the number of guards on Phuket beaches by 20 per cent, despite a 10 per cent increase in government funding.

“We have yet to decide whether we will agree to the 22mn baht contract,” Phuket Lifeguard Club President Prathaiyut Chuayuan told the Phuket Gazette. “If we renew the contract, I will have to cut staff by 20 per cent.”

The new contract represents a 2mn baht raise from last years’ 10-month contract, set to expire on April 27, and is the first raise after a three-year freeze.

However, Mr Prathaiyut said that the Phuket Lifeguard Club would be spending 3mn baht in upgrading equipment, and that the company wasn’t making enough money from the contract after paying upkeep costs and salaries.

Despite Mr Prathaiyut’s complaint that the company is not making enough money, the lifeguard chief expressed his desire to give raises to the lifeguards under his command.

“We have been working hard for three years on the same budget. My staff have never gotten a raise. Cutting down on our numbers is the only way I can do that,” Mr Prathaiyut said.

“We have 108 men working as lifeguards throughout the island daily. If we renew the contract and cut some of the staff, there will only be 88 men on duty – covering the same area – to look after people’s lives,” Mr Prathaiyut said.

Last year, the PPAO increased the number of lifeguard stations from 33 to 38 (story here), but the budget was not raised to support the increase (story here).

“We work hard and save people’s lives for little pay. Our lifeguards have big hearts and have in the past even volunteered to do their jobs without payment,” said Mr Prathaiyut.

“Already, one foreigner and one Thai national have died this year; 41 people have been saved,” Mr Nararit added.