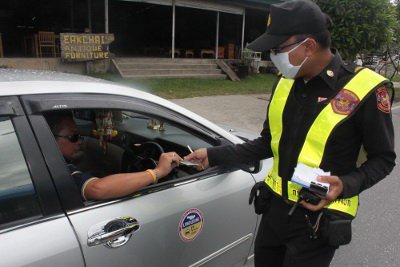 PHUKET: A total of 194 drivers were charged and fined yesterday for illegally operating a taxi or for not displaying the now-mandatory stickers that publicly identify the drivers on the sides of their vehicles.

The haul in arrests came on the first day of an island-wide crackdown on illegal taxi drivers in Phuket as officers from the Phuket Land Transportation Office (PLTO) joined forces with their Bangkok counterparts in setting up checkpoints on major roads across the island.

Phuket Vice Governor Chamroen Tipayapongtada, who inspected the checkpoint in front of the Thung Thong Police Station in Kathu late yesterday afternoon, told the Phuket Gazette that checkpoints were also set up at Muang Mai, in Thalang, and near Nai Yang Beach.

“We randomly checked vehicles and found people working illegally as taxi drivers or operating taxis not in accordance with our agreement. We fined them and warned them that they have to strictly abide by the law,” he said.

PLTO Chief Teerayut Prasertpol explained that drivers who had not applied to register their vehicles as taxis were charged and fined 2,000 baht each.

“Drivers who have already registered – or applied to register their vehicles – but were found not displaying the stickers on the sides of their cars were fined 500 baht,” he said.

Mr Teerayut explained that his office had received applications to register 2,882 vehicles that were previously being used as illegal taxis.

“That’s about 93 per cent of the 3,595 illegal taxis that our office found in operation in Phuket. However, that still leaves 713 vehicles that need to be registered as taxis, most of those are vans,” he added.

Mr Teerayut explained that the biggest remaining obstacle stopping taxi drivers from becoming legal was the cost in changing the registered use of their vehicles with their finance companies.

“The drivers have to the change their vehicles from being ‘personal use’ to ‘public use’. This process can cost up to 30,000 baht per vehicle.

“However, we have contacted several finance companies to ask for their help in reducing the fee. They are now considering it,” he said.

The checkpoints will continue to be set up at random locations around the island until May next year, as drivers now have until the end of February to apply to have their vehicles registered as taxis, said Mr Teerayut.

After that deadline, the process of becoming a legal taxi will be much more difficult, explained PLTO officer Jaturong Kaewkasi.

“Once all the taxis in Phuket are registered, it will help reduce crime. If passengers forget their belongings in a taxi, it will be a lot easier to find the taxi since we will have a database of all taxis on the island,” Mr Teerayut said.