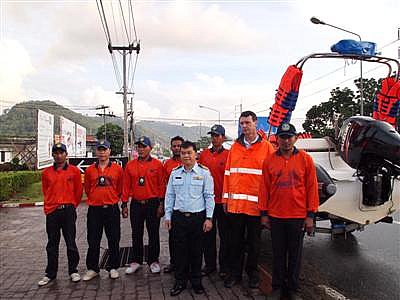 PHUKET: Five rubber dinghies loaded with safety equipment left Phuket this morning for the flood-ravaged central plains, where they will assist in transporting goods and passengers until the situation there returns to normal.

Four of the vessels are on loan from the Department of Marine and Coastal Resources (DMCR) Region 5 office in Phuket, and are operated by that agency’s Conservation Center.

The fifth boat is provided by the Chalong-based Cholamark Boat company, which has been manufacturing dinghies and marine safety equipment in Phuket for 20 years.

Cholamark owner Hans Peter Martin said the company has assisted in flood relief efforts before, including, most recently, the flood-prone city of Haad Yai.

Mr Martin, who will be among the 10-member team embarking on the humanitarian mission, said his company is prepared to mobilize more boats and equipment if requested.

Four of the boats can transport up to fifteen people, while the fifth can carry up to thirty.

In his capacity as president of the DMCR Conservation Center in Phuket, Paiboon Upatising said other provincial chapters around the country had already mobilized to help victims in the many areas where transport by wheeled vehicle has become impossible.

The Phuket mission would bolster the existing aid effort and the workers would remain in the area until the situation returns to normal, he said.

The exact location where the boats will be deployed has yet to be announced. There are many areas that could use them.

State hydrologists say a massive surge of floodwater, which has already killed 253, will move south through the central plains this week and is likely reach Bangkok between October 16 and 18.