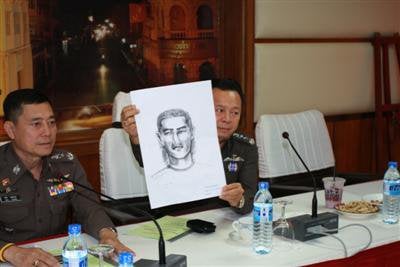 PHUKET CITY: It has taken a phone call from the Australian diplomatic mission, but Phuket Police are now renewing efforts to catch the man responsible for a horrendous knife attack on a young Australian man several months ago.

In early February this year, 20-year-old Jamie Shackleton was left with terrible facial injuries after being slashed in the face with a machete during an attempt to rob him on Naka Road in Tambon Wichit.

Almost five months later, police have yet to arrest any suspects.

Now, following a phone call from the Australian Embassy to the Royal Thai Police Regional Headquarters in Surat Thani, police are offering a 50,000-baht reward for any information that helps to catch the slasher.

On June 13, Regional Commissioner Santarn Chayanon came to Phuket to chair a meeting of local police about the case.

The meeting was attended by Phuket Provincial Police Commander Pigad Thantipong and investigating officers from all eight police districts in the province.

“We’re offering a special 50,000 baht reward for information about this case. We’ll get the suspects as soon as possible,” Lt Gen Santarn said.

The sheer brutality of the attack may help explain the Australian mission’s interest in the case.

At around 8pm on February 1, Mr Shackleton was returning home by motorbike from the Phuket Old Town Festival with a Thai friend when two suspects on another bike forced the pair to stop.

The suspect riding pillion, who was wielding a 26cm machete, demanded the victims hand over their valuables.

When Mr Shackleton reached into one of his pockets, the assailant slashed him in the face – probably believing the young Australian was reaching for a weapon.

Mr Shackleton’s mouth was sliced open several inches from the corner of his left lip up through his cheek. He also lost four teeth.

Police showed a sketch of the slasher during the June 13 meeting. He has short brown hair, a lot of stubble and pimples, and a prominent nose. He is believed to be 28-30 years old, well built, and around 180cm tall. He speaks Thai with a Southern accent.

The slasher’s accomplice was wearing a motorcycle helmet at the time of the attack.

Phuket City Police Superintendent Wanchai Ekpornpit said police have been investigating the case all along but have yet to name any suspects.

Mr Shackleton has recovered well from his injuries, police said.

He told the Gazette he will undergo dental surgery in Phuket soon but has finished with his facial reconstruction work.

Mr Shackleton denied that he has opened an Internet cafe, as was previously reported.