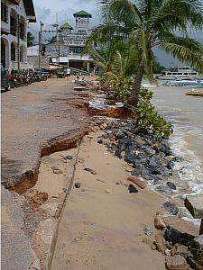 PHUKET: Provincial officials have today been counting the cost of repairing damage caused by the tropical depression which has buffeted Phuket over the past few days, and which has now moved away into the Andaman Sea. Electricity company staff spent the day working to repair downed power lines and blown transformers in parts of Phuket Town, Patong, Ao Makham, Kata-Karon and Chalong. With Phuket’s telephone cables usually strung alongside power lines, most of the areas that lost electricity have also been without phones. A number of seaside roads were damaged, particularly around Chalong and Rawai, where promenades were also breached in several places. Staff from the Public Works Office have been surveying the damage in order to determine which is in most urgent need of repair. Phuket escaped the most serious consequences of the storm. Unlike other provinces, there were no deaths or injuries as a result of the severe rain and winds. Agence France Presse (AFP) today reported that Thai officials had said that two people drowned in Prachuab Khirikhan, two in Ratchaburi, and three in Nakhon Sawan. The officials also told AFP that 54,017 families were “affected” by the flooding.