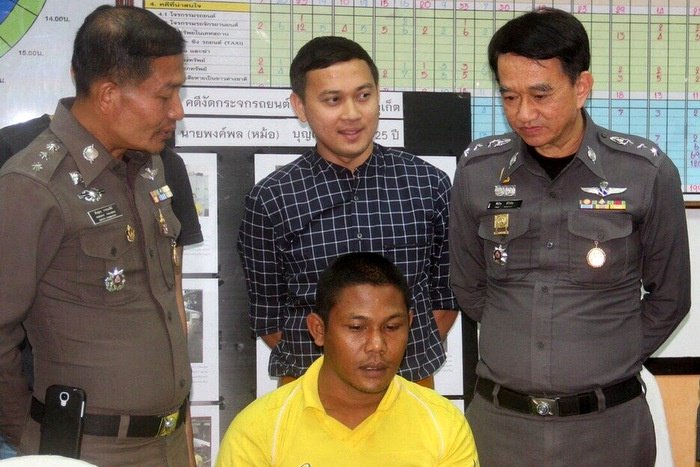 PHUKET: Police have arrested a man who has confessed to breaking into and stealing items from five cars in Phuket Town on Friday and Saturday night.

Pongphol Boondetpiti, 25, was arrested at a house in Rassada yesterday.

Mr Pongphol confessed to using scissors to break into the vehicles.

“I looked for cars with at least one bag inside,” he said. “I can break into any car. It doesn’t matter how expensive it is. It takes me no more than 10 seconds to get in and grab any valuables inside.”

Mr Pongphol was released from prison less than two weeks ago, after serving two sentences for previous smash-and-grab crimes.

“Mr Pongphol was sentenced in 2009 for 10 smash-and-grab robberies, and sentenced again in 2012 for another 15 thefts,” Lt Col Somsak said.

“After receiving a complaint about the car robberies in Phuket Town, we checked criminal records and pulled in likely suspects for questioning. Mr Pongphol was among them.

“He was arrested when we went to pick him up for questioning.”

Mr Pongphol gave the media some rather ironic advice: “Please do not leave valuables in your car. All it does is attract thieves.”

Mr Pongphol blamed ‘bad luck’ for a poor career as a criminal.

“I had to turn to crime to get money. I can’t do hard work, so smash-and-grab was the only choice left,” he said.