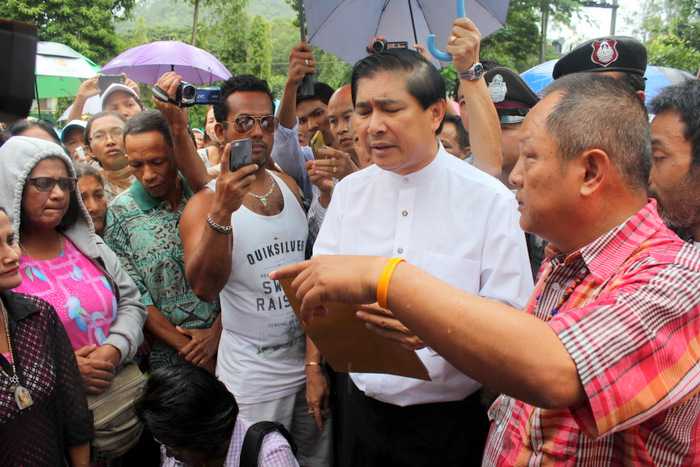 PHUKET: Hundreds of beach vendors today presented a formal letter to Phuket Governor Maitri Inthusut, demanding fair treatment and requesting that the complaint be submitted to the National Council for Peace and Order (NCPO).

The group, led by Palat Jantarasopin, leader of the Tourism Service Operators Club and beach vendor Chakkarin Charoenjit, outlined nine key requests to facilitate vendors to continue to operate tourist service businesses on Phuket’s beaches, which are by considered by law to be public land.

The nine key points outlined in the letter were:

1. That beach operators not be labelled as land encroachers, but rather as people providing a valuable service which many tourists demand.

2. A recognition of beach as a public place, but that according to law, local governments can manage the beach by allowing people to work on the beach and make a living, under government mandated regulations.

3. A request that the Marine Office allow beach vendors to register legally in a reasonable time period and that only those with pre-existing businesses be allowed to register.

4. A request for the government to work with local vendors to find solutions and clarify the rules governing the operation of legal beach businesses.

5. That the businesses and people operating on footpaths and roads, such as rental motorbikes, taxi and tuk-tuk operators, register with the Land Transportation Office and be certified legal and set central government-approved prices.

6. A demand to arrest people operating criminal mafias, and not unfairly target legitimate local business operators, which can cause conflict between officers and locals.

7. An acknowledgment that NCPO orders must be followed but with due concern to preserving Phuket’s tourism image.

8. A request that restaurant owners who were ordered to move from the beaches be able to work with authorities to establish legal zones where their businesses can be re-established, in order to meet the demands of tourists seeking food and beverages during their visit to the beach.

9. A request that the government address these problems sincerely and fairly.

“All the locals need is a place to earn a living. They want to do their job, not change to other jobs,” said Mr Palat.

“We would like to ask the Governor to recognize that we are in trouble, about 1,000 of us have lost our jobs,” Mr Chakkarin said.

“We had been following rules and conditions issued by local authorities. We beg for another chance. Please tell us what to do so we can do the jobs we are good at.”

Rattana Salee, from the Nai harn Beach Massage Group said, “We would like to know when we will be back on the beach. We need a clear answer. Giving massages is the only job that I have been doing for 20 years.

“We need money to live. We cannot change our jobs.”

Governor Maitri promised the protesters that solutions would be announced before the coming high season, which traditionally starts after the end of October.

“We are now having a local office open for vendors to register. So we can see [the situation more clearly] and may be able to provide ideas about alternative ways to solve the problem,” Governor Maitri said.

Late last month, government offices opened to enable beach vendors to register. More than 370 vendors who lost their jobs during the Patong and Kamala beach cleanups registered their complaints with the Kathu District Office and demanded assistance from the NCPO for loss of income (story here).

“The solution must be arrived at and applied before the high season arrives,” added Governor Maitri.