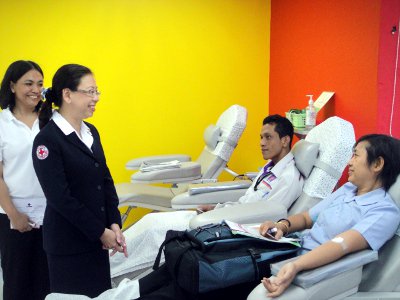 PHUKET: The Phuket Regional Blood Center (PRBC) is asking for increased donations for November as parts of Thailand experience the worst flooding in half a century.

“Due to the floods in Bangkok, the National Blood Center had a shortage of blood at the beginning of the month. The center normally receives about 1,500 units of blood daily from donors, but it went down to less than half that – about 600 units per day,” said PRBC Acting Director Pornthip Rattajak.

“We had some celebrities help us with public relations and a lot of people responded by making donations – for about a week, we had 2,500 units of blood donated daily. Now it’s back to normal.

“With the floods continuing, we still need blood and we hope that the PRBC can collect more. Many local schools and other organizations that never did so before have asked for us to set up our mobile clinics on their property. We’re very thankful for that,” Ms Pornthip added

The mobile clinics for the November blood drive are at the following locations and times:

November 16, 9am to 12pm, Alueekprachason School

John Terry wants to come out