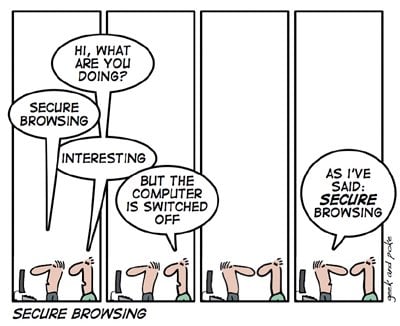 PHUKET: Last week I talked about the likely increase in the amount of spam being generated by botnets running on PCs here in Phuket. I don’t have any numbers – nobody does – but Thailand’s Internet Service Providers are getting blocked left and right by spam filters, all over the world.

The reason is simple. An enormous number of people in Thailand are running PCs that have been taken over by botnets, and 99 per cent of the people running infected PCs don’t even know it.

Here’s how to increase your chances of getting infected:

1. Run Windows XP. If you really want to dance with the devil in the pale moonlight, run a pirate copy of Windows XP. Yeah, even the “good pirate copies” that say they’re genuine are susceptible.

2. Use Internet Explorer 6. It’s like sticking a placard on your PC that says, “infect me”.

3. Keep using an old version of Flash, or Adobe Acrobat Reader. About two years ago, Flash and Reader became the number-one “vector” for PC infections: right now, more PCs are infected via Flash and Reader than all other exposures combined.

Last August, Avast published the results of a six month study that found 74 per cent of the rootkit infected machines they scanned were running pirate copies of Windows XP. (Rootkits are infection programs that run “underneath” Windows and are thus very hard to detect and remove.)

Minimizing your chances of being infected is easier than you think – and it doesn’t need to cost you anything, if you have a genuine copy of Windows.

The vast majority of PCs in Phuket are running pirate copies of Windows – even the PCs sold by the leading computer shops come with pirated Windows, despite you asking for a real copy when you bought the PC.

I’ve heard of many, many people who brought PCs to Thailand, took them to a repair shop, and had them returned with pirate copies of Windows installed. For no apparent reason, the repair people took it upon themselves to blast away a good copy of Windows and replace it with a counterfeit one.

If you think there is any chance you have a pirate copy of Windows, take these steps:

Step 1: Click Start, right-click Computer (or My Computer) and choose Properties. At the bottom you’ll see if the copy of Windows you have has passed ‘Windows Genuine Advantage’. Even if the notice says you have a “Genuine” copy, you don’t necessarily have a genuine copy. Keep going.

Step 2: Get rid of your old antivirus software and install Microsoft Security Essentials (MSE). It’s free, fast, and very accurate – and you’ll never be bugged to pay for antivirus again.

Bonus #1: If you can install MSE, you have a close-enough-to-genuine copy of Windows.

Bonus #2: MSE catches many rootkits that other AV products miss.

Step 3: If you have got MSE installed, download and run Windows Defender Offline (WDO). That’s the only tool I know that can find and disinfect most Windows rootkits. You can’t run WDO from inside Windows, it has to be run outside. Full instructions on the Microsoft site. Warning: in rare cases I’ve heard of WDO wiping out pirate copies of Windows. Back up your data before you run it.

Whether you have a pirate copy of Windows or not, here’s what you can do to protect yourself:

Step 2: Download, install and use either Firefox or Chrome. Both are free. Personally, I’m using Chrome more and more these days. They both co-exist with IE with no problem, and neither is as susceptible to active infections as IE.

Step 3: Don’t use Adobe Reader. Download and install Foxit PDF reader. It works almost as well, and doesn’t have as many security problems.

Step 4: If you use Firefox or IE, get Flash updated to the latest version. Chrome has a Flash player built in and sandboxed – one of the main reasons why I use Chrome over Firefox these days.

Step 5: Get Windows and your Microsoft applications up to date. Click Start, Programs (or All Programs) and near the top click Windows Update or Microsoft Update. Follow the instructions to download and install all of the current updates.

I keep a running series of recommendations about Microsoft Update at AskWoody.com, and I tell people when to patch and when to hold off. But if you haven’t patched Windows in the past few months (or years), it’s much more important that you get patched up now.

After you’re caught up, follow my site for recommendations about when to install Microsoft patches and when to hold off.

Step 6: Download, install and religiously use Secunia PSI which scans your computer constantly and figures out if there are updates for any of your programs.

Optionally, it will automatically install all of the latest updates. Free, and it’s worth its weight in gold.

These are the simple, basic steps that every Windows user needs to take, to keep their PC protected. While there are lots of fancy things you can do, just following these steps should ward off the vast majority of problems.

And, if you are running a pirate copy of Windows, for heaven’s sake, get a real one. There are lots of corners you can cut in the PC industry, but that isn’t one of them. I’ve been recommending for almost three years that people install Windows 7 on any PC other than old laptops (which can’t handle it).

If you have friends in North America or Europe, they can buy copies of Windows 7 Home Premium for $50 or less, in three packs, and about $100 for single packs.

The cheapest copies of Windows 7 I’ve found in Phuket are at SuperCheap, but there are many alternatives, and they aren’t a whole lot more than 3,500 baht.

Do yourself and your PC a favor, and get legal, at least with Windows, OK?