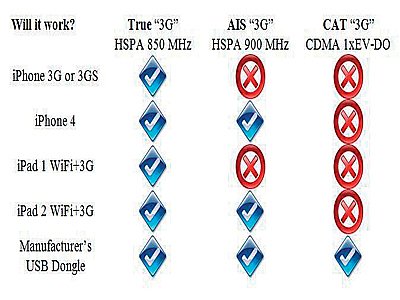 Don’t take my word for it. If you’re thinking about signing-up for AIS 3G, drop by phuketinternetspeed.com and see what speeds people are reporting.

At this moment, most people with AIS 3G are reporting 1.2 to 2.6 Mbps international downloads – faster than most of the landlines I discussed in Live Wire last week, and more than enough for streaming TV-quality video.

One enterprising tester reported he was getting more than 3.8 Mbps while sitting under an umbrella on Patong Beach.

AIS offers many packages, but the ones you’re most likely to want are these:

Voice + 3G (for your iPhone or Android) runs 899 baht/month and includes 500 minutes of voice calls, 300 SMSs, unlimited WiFi at AIS and 3BB hotspots (there aren’t many in Phuket yet), and up to 2 gigabytes (GB) of data at fast speeds. If you don’t want WiFi, get the 839 baht/month package.

3G, no Voice (for your iPad2 or Android tablet) costs 799 baht/month , including WiFi. AIS advertises this as “unlimited data” but it isn’t, really.

You can also get a prepaid SIM card, which runs 150 baht for 30 hours of voice or data, with no WiFi.

AIS also has “Pocket WiFi” (what many of us would call MyFi), a box about the size of a deck of cards, that taps into the AIS 3G network, and lets you access the network with a regular WiFi connection.

Heed the graphic on this page: if you have an iPhone 3 or one of the original iPads, it won’t pick up the AIS 3G signal.

(See why I hate the term “3G”? It’s all marketing – anybody can call anything “3G.”) If you don’t know whether your phone or tablet will work with one of Phuket’s 3G networks, check the details at gsmarena.com.

The iPhone 3 and iPad 1 will work with True’s 3G network, but at this point True’s network is running about one-quarter as fast as AIS, and the coverage is still only on the extreme west coast of the island, plus Samkong in Phuket Town.

I bet True will strike back in short order, though. Let’s see what happens.

“Mr. X” K. Sitthichai will have a Mac Clinic on Saturday, August 13, 10am, at the Sandwich Shoppe in Chalong.

As you all know, I’ve been trying to get a Mac Clinic going, to mirror our PC-centric Computer Clinics on Sunday morning. I’m hoping that we’ll finally, finally get enough interest to get it off the ground this time. The iClinic covers all things Apple: Mac, iPhone, iPad, iCloud, and all those other iThingies.

If any of you know any Apple dealers, this is an ideal chance for them to bring some demo machines, and (especially!) a technician who can answer all of the Mac questions that we seem to get. They’re selling a heck of a lot of equipment, and I seem to get all of the tech support questions!

Please, tell your friends. Let’s see if we can get this thing rolling….