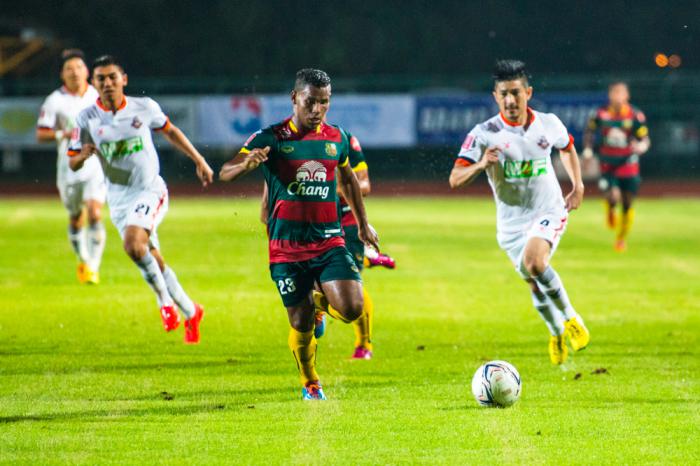 PHUKET: As the Phuket FC Ronins sharpened their blades in preparation for their battle against the Bangkok FC Iron Bulls last Saturday, nearly 5,000 fired-up fans braved the roads to Surakul Stadium under unsettled skies.

Fans were on their feet from the beginning, cheering on their hometown team, and jeering at the Iron Bulls.

They had two reasons for their exuberance: the team from the little island taking on the big city boys and the fact that Phuket was in number five on the table, with Bangkok just one slot ahead in number four.

But my, how the tables have turned. Intense action from both sides kept everyone’s gaze moving back and forth down the pitch, with Phuket fans booing calls against them, and the 20 or so Bangkok fans (Bulligans) returning the favor.

A crowd of nearly 5,000 turned out to Surakul Stadium to support the Ronins. Photo: Jeremie Schatz

Both teams were holding strong until just about the midway through the first half, when an attempted drive towards the outside edge of the penalty box by Ney Fabiano was revoked. He made a desperate pass to Henrique “Eber” Ferrerira de Bessa just in front of the goal, who managed to keep the ball away from Bangkok’s goalkeeper and a swarm of defenders, long enough for forward Anusak Laosaengthai to drive it home.

If there wasn’t electricity in the air before, there certainly was after that goal. Before the crowd could even think about finding their seats, Phuket kept their momentum going, and in less than a minute, saw Anusak driving another home in fine form. The Iron Bulls were seeing red, but turned up the heat to no avail, with the board reading 2-0 at halftime.

Into the second half, defender Pyne Soe made a strong shot on goal, just outside of the far post, to the crowd’s dismay. However, their roaring cheers and songs did not fall on deaf ears as Christian Alex da Silva Santos made his team proud by pounding one into the back of the net to counter the one and only Bangkok goal the Ronins goalkeeper let slip by.

Phuket FC coach Stefano “Teco” Cugurra was proud to have his team take down the respected club from the north.

“The first half was an easy game, a controlled game all the time, but in the second half, because they had the emotions come in, they [Bangkok] had a lot of hard tackles. They are very tough, they are a good team,” he said.

Phuket’s 3-1 triumph over Bangkok, and fourth win of the season, sees them advance to the number three position on the Yamaha League One table, just under Ang Thong FC, while Bangkok descends to number six.

In their next league match, Phuket FC will face Chiang Mai FC on their hometown turf on April 20.