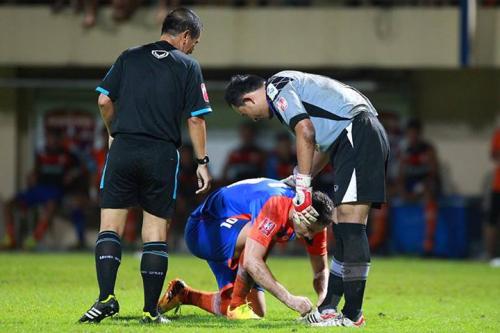 PHUKET: If there was any hope left for Phuket FC to still get promoted following Wednesday’s home draw to Air Force (see story), then it was all but relinquished following their away-loss last night to Singhtarua FC.

Played in front of an energetic blue-and-orange-clad “Klong Toei Army” crowd at the PAT Stadium in the heart of the Thai capital, the match was both side’s 25th of 34 fixtures in the Yamaha League One (YL1) 2013 season.

Once again, Phuket took an early lead – through a fabulous goal by Cristian Alex five minutes into play – and once again, they let such a lead slip away, with Singhtarua’s Serbian sensation, Ivan Petrovic scoring the equalizer on 34 minutes.

In terms of possession and chances, it was a one-sided match in favor of the home team, who found what would prove to be the wining goal through Leandro Oliveira, scoring his 16th of the season nine minutes into the second half. Leandro is now second for the golden boot race, trailing Bangkok’s golden boy, Lee Tuck who has 17 goals.

Meanwhile, Phuket’s Brazilian attacking duo of Alex and Luiz “Dudu” Purcino found far and few chances, and even Chana Sonwiset and Geoffrey Doumeng, fresh off the bench in the second half, could not find the means to effectively penetrate a solid Port Lions’ back line.

For goals and highlights of the match, click here.

The result ensured that the Port Lions retain their 3rd place standing with 46 points – tied with Bangkok FC – both now 12 points ahead of Phuket, who dropped back into 7th place, still with 34 points.

There are nine matches left in the season – 27 possible points – but even if Phuket wins all of its remaining matches, promotion prospects still look slim.

If Bangkok and/or Singhtarua win six of their remaining matches – or even win four and draw four – the Islanders would not be able to advance to Thailand’s elite league, a privilege reserved for only the top three YL1 teams.

Meanwhile, both Nakhon Ratchasima and Saraburi are still in fighting contention, trailing 3rd place by 7 and 10 points, respectively.

Following are all the YL1 results from the weekend.

* The bottom four teams will be relegated to Division 2 regional leagues.

Phuket FC now return home to next host Ayuthaya FC this Saturday, August 31. Kickoff will be at 6:30pm.