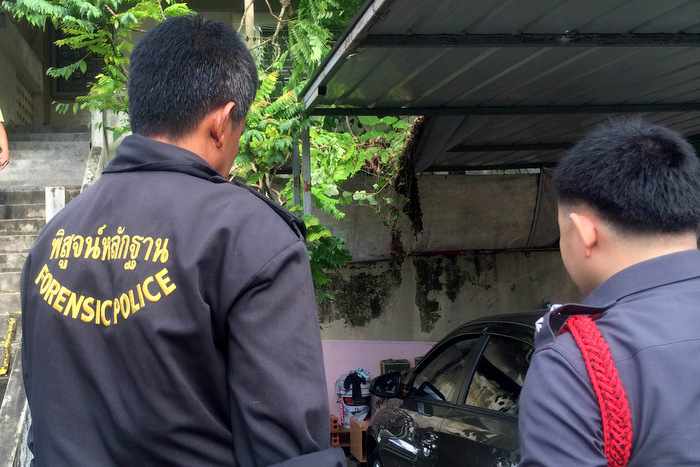 PHUKET: The Phuket City Police this morning are reeling after the death of one of their well-liked officers by suicide.

Sen Sgt Maj Sapeewat Kongchim was found in the car park of the police accommodation units behind the Provincial Police headquarters on Yaowarat Road, in Phuket Town, at 7:30am.

He had a single gunshot wound to the head. The weapon used was his .38 service revolver.

Officers living in the units heard a loud crashing noise at about 4am.

“When they went outside to investigate, they saw Sgt Sapeewat walking around, so they paid no attention,” Lt Kraisorn told the Phuket Gazette.

“He went back to his room, and later came back down and sat on the stairs on the ground floor. Nobody thought he was thinking about suicide.”

At about 7:30am, officers heard a single gunshot and found Sgt Sapeewat slumped over a Styrofoam box under a carport beside the building.

“Sgt Sapeewat lived on the third floor. We believe he jumped from his unit at about 4am, but the carport broke his fall and he landed on a car parked underneath it,” Lt Kraisorn explained.

“We believe that since his attempt to die by jumping from the building failed, he then used his gun.”

Sgt Sapeewat, from Trang province, was known as a friendly man with a wife and one child.

“He was a friendly, fun person,” said Lt Kraisorn. “He loved hanging out with friends and he helped out at the Phuket 191 emergency call center.”

However, Sgt Sapeewat had tuberculosis and recently needed a lot of time off work to see a doctor.

“At this stage we believe that he committed suicide because of his disease,” Lt Kraisorn said.

“However, we will continue our investigation to establish whether any other factors may have prompted him to commit suicide.”

Laguna secure victory against the Village