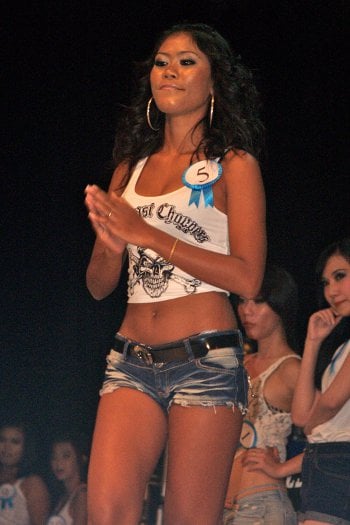 PHUKET: After being moved forward a few weeks, the 18th Annual Phuket Bike Week was a success over the weekend, despite heavy rains that threatened to wash out festivities.

Among those in attendance were Patong Deputy Mayor Chairat Sukbal, Royal Thai Navy officials and representatives of sponsor Chang beer.

As in years past, most activities took place along the beach road and at Loma Park, which hosted several live bands, a tattoo contest and the Miss Phuket Bike Week 2012 contest.

On Saturday afternoon, attendees got a rare treat when Thai Navy and Marines demonstrated an amphibious insertion onto Patong Beach that included smoke grenades and firing blanks.

Bikers came from all over Southeast Asia, with clubs representing Cambodia, Malaysia, Indonesia, Brunei, Vietnam as well as expats from Holland, Canada, England and the USA.

Mr Chairat thanked those who came to Phuket on the original date and were unable to change their plans, saying he was grateful they stayed.

The Phuket Gazette is once again pleased to have sponsored this event and wishes the bikers who rode in from across the region a happy and safe return home.