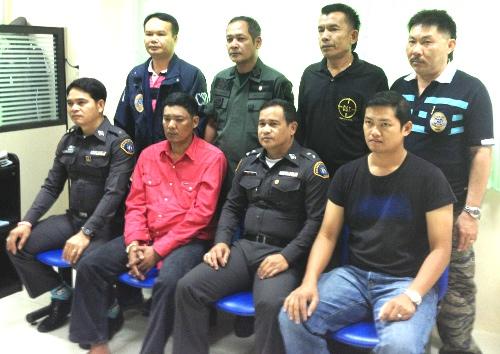 PHUKET: Phuket Police will have to wait for their counterparts in the Thai tourism town of Cha-am to close their murder investigation before taking the confessed assassin of Phuket newsman Wisut “Ae Inside” Tangwitthayaporn into custody (click here).

Police from the Crime Suppression Division headquarters in Bangkok, along with local Cha-Am Police, moved in and arrested Tossapol Ketkaew, 36, at a house in Cha-am yesterday for the 2004 murder of Kra Aromdee.

“Tossapol confessed [to police] that at around 9am on January 12 last year he, along with the help of Noppadol ‘Pae’ Praisri and Somkuan ‘Boy’ Deepan, used a 9mm gun to shoot Ae Inside dead,” case investigator Lt Col Pattanapong Sripinproh said.

“He claimed that Somkuan was the one who arranged the gun for the killing and Noppadol was the one who drove the motorbike, allowing Tossapol to ride pillion as the gunman,” he added.

Tossapol’s confession to police concurs with that of Noppadol, who made his confession immediately after his arrest in January last year. (click here).

“Tossapol said he was paid 13,000 baht to be the gunman. He claimed that he received a message from Somkuan, but does not know who hired Somkuan to organize the assassination,” Lt Col Pattanapong said.

“Somkuan is still at large. Police are searching for him,” he added.

Lt Col Pattanapong said that while conducting their investigation into the killing of Kra Aromdee police discovered that Tossapol and Sanya were different aliases used by the same man.

“Tossapol confessed that he was involved in both killings. He said that on August 1, 2004 around 4pm, he and Yuenyong Uangjean used a .38-caliber gun to kill Mr Kra in front of a house in Tambon Khao Yai, Cha-am, in Petchaburi.

“Tossapol confessed he was the one who pulled the trigger,” he added.

Lt Col Pattanapong said the Cha-am killing was over a “personal conflict”, but did not elaborate on what the conflict was.

Phuket City Police chief Sermphan Sirikong told the Phuket Gazette today that his officers will have to wait for the Cha-am murder investigation to close before they can get their hands on Tossapol.

“We are preparing our official request to detain Tossapol. However, we have to wait for Cha-am Police to close their investigation first,” Col Sermphan said.

“The application will be filed under Phuket Court arrest warrant number Jor 39/2555 dated January 24, 2012. He is charged with co-premeditated murder,” he added.

“The search for Somkuan is ongoing. This is not the only case we’re following up on. Police are making a serious attempt to close every case on the island,” chief Sermphan said.

Watchara Malikaew, Mr Wisut ‘s best friend and co-worker on Mr Wisut’s Inside Phuket newspaper, said, “I was so delighted to hear that the suspect who pulled the trigger was arrested. The case is one year old. It shows that police did not abandon the case.

“However, I would like to see police arrest the other suspect who is still at large as I believe he is the sole connection to the person who hired the killers,” Mr Watchara added.

Phuket Police in February last year arrested and brought in for questioning Phuket businessman Atsadakorn “Pod” Seedokbuab on allegations of him being the mastermind behind the assassination of Mr Wisut (click here).

Mr Atsadakorn, owner of KPP Cable TV in Phuket and at that time a vice president of the Phuket Chamber of Commerce, surrendered to police.

He denied knowing Noppadol “Pae” Praisri before Noppadol’s name was splashed across newspaper headlines, but confirmed he did know fellow suspect Somkuan “Boy” Deepan, 48, before the killing.

“I know Khun Boy [Mr Somkuan]. He is a friend and even I hired him to operate a digger at a construction site at one of my developments,” Mr Atsadakorn said.

“But I do not know where he is now,” he said at the February 16 press conference.