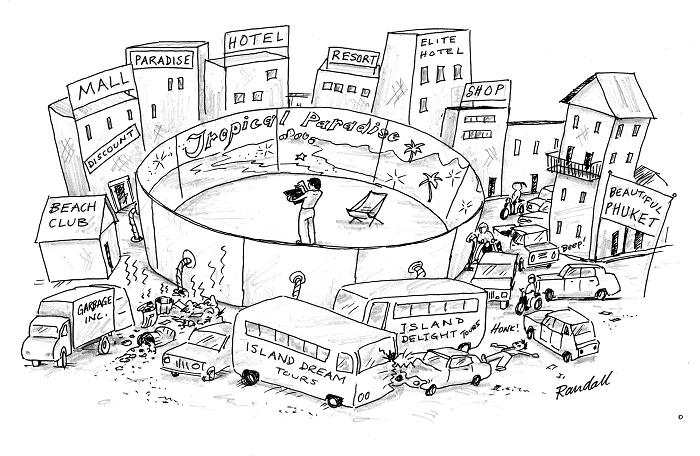 PHUKET: Reports that the newly-formed Phuket City Development Company plans long-term investment in the province as a future ‘smart city’ and regional hub for so-called ‘MICE’ tourism is potential good news for the island.

The Phuket Gazette hopes that in addition to the group’s business goals, sustainability and environmental conservation will be included while planning its objectives.

The list of investors in the venture includes members of some of the island’s wealthiest families, that have long sought influence over, and support from, the powers-that-be in Bangkok.

The levels of support Phuket has enjoyed have waxed and waned over the years, most notably depending on the relative successes of the locally-powerful Democrat Party and its arch-rival Thai Rak Thai Party – and subsequent reincarnations – under former PM Thaksin Shinawatra.

Perhaps that best example of the how this political ebb-and-flow has stilted Phuket’s growth can be seen with the island’s decades-old effort to build an international conference and exhibition center somewhere on the island.

For years, politicians have delayed efforts to find the most suitable location for such a facility, with these families cheerleading sites either located on their own landholdings or close enough to ensure benefits thereto. In the one instance when a site was found and ready to be funded, the project was nixed at the last minute by then premier Yingluck Shinawatra.

It is also worth remembering how these families amassed such enormous wealth. For some, it started during the tin mining era, when members of these families were granted lucrative government concessions to extract tin from state land.

Although these concessions clearly stated that the land was to be returned to the state in a restored condition, many simply planted agricultural products and began paying property tax after their work was complete. This was the first step in the process of claiming it through legally-issued land title deeds. The families were thus able to parley their landholdings into the vast fortunes we now see.

Phuket can no longer rely on its natural beauty as the sole means of attracting tourists. As we embark on the ambitious journey, we need to do what we can to preserve what remains.

Any ‘development’ that sacrifices the environment at the altar of short-term profit is unacceptable.