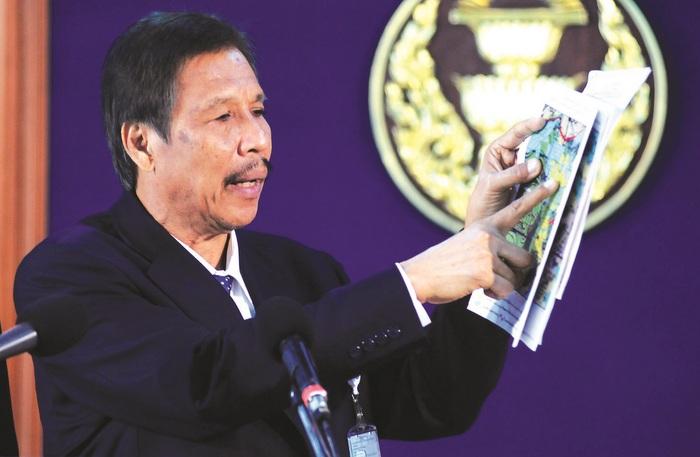 PHUKET: Officials in Bangkok are fuming after Prime Minister Gen Prayut Chan-o-cha was told that the ‘One Map’ project, aimed at seeing state agencies using a map set at the same scale, sliced off about 50 billion baht’s worth of national park and forestry land in Phuket for the benefit of private investors.

In the past, the use of maps with different scales led to encroachment on forest areas and the fraudulent issuance of ownership documents, as areas often overlapped due to the varying scales, explained Justice Minister Gen Paiboon Koomchaya, who is also the chair of the national state land boundary enhancement committee.

The project was proposed last year as part of a solution to tackle the widespread issue of encroachment and deforestation.

When the 1:4000 scale map is officially used nationwide, it will be impossible to issue land ownership documents that are fraudulent, and authorities will be able to take more effective action against people who encroach on forestland, Gen Paiboon said.

However, the Prime Minister last week received a complaint from Damrong Phidet, a member of the National Reform Steering Assembly and former director general of the Department of National Parks, Wildlife and Plant Conservation (DNP).

“I have obtained and passed on information incriminating officials who abused their power and sold off about 1,200 rai of forestry and park land,” said Mr Damrong. “I was informed by a number of officials who were working on the One Map project about inaccurate information being used to mark park and forestry land. They did not want to sign off on the measurements, as they knew that land was missing.”

The land, which is valued at about 50 billion baht, was divided up into 178 plots and originally issued NorSor 3 Kor land-usage documents, explained Mr Damrong.

“The 50 billion baht worth of land was stolen from the park for the benefit of businessmen, who then built luxury hotels and resorts on it,” Mr Damrong alleged. “I want anyone involved in this land snatching to face the full force of the law.”

The complaint to the PM was also filed with the Department of Special Investigation, the National Anti-Corruption Commission, the Ministry of Natural Resources and Environment, and the Ministry of Justice, confirmed Mr Damrong.

“I brought it to the attention of the Prime Minister for him to judge, hoping that he will order a full investigation into those involved in taking the measurements,” Mr Damrong said.

Gen Paiboon rebuked Mr Damrong, following the complaint’s submission to PM Prayut, saying that there were subcommittees in all provinces, as well as regional level panels, to examine and verify the boundaries of state land nationwide after the state map was changed to a 1:4000 ratio across the board. Hence, he believes no wrongdoing should have occurred, as claimed by Mr Damrong.

However, if there were issues, Gen Paiboon assured the press that he would take action against the officials himself.

Mr Damrong confirmed to the Phuket Gazette that he had submitted all relevant documents to the Ministry of Justice.

“I am willing to meet with Minister Paiboon in person, if he so wishes,” Mr Damrong said.

“The team working on this project is from the central government. I’ve had no part in it. However, from what I know, it looks like about 1,200 rai of national forest has been commandeered from Phuket – including about 400 rai of national park land,” said Mr Kitiphat, who nearly resigned in 2014 after receiving death threats related to land encroachment.

“Part of the land that will be deemed legal, if the new boundaries are put in place, is currently being used by a number of luxury resorts, which are under investigation or in legal proceedings,” Mr Kitiphat told the Gazette. “I am very concerned about this. If the new boundaries are signed off, then we suddenly lose our cases and the land.

“I hope that the committee will reevaluate the situation and the new boundaries will not be used for the map. I don’t want to lose a single square centimeter more of our park.”

“Any land that has a Chanote issued after 1964 we consider to be illegal,” Mr Damrong told the Gazette during his 2012 investigation into 10 resorts that had allegedly encroached on national park land.

“In 1979, the Land Department issued land ownership documents for 178 plots that were in fact part of the national forest or national park land,” Mr Damrong said. “It is unclear whether or not they realized that they were issuing these documents for protected areas. We are now trying to reclaim the land.”

During his 2012 investigation, Mr Damrong cited the resorts, villa developments and management companies under investigation for allegedly encroaching on Sirinath National Park land. They were named in Thai as:

In 2014, officials called for the land titles of about 100 rai of property owned by other big name companies on the island to be revoked. The companies were named as Phuket Pullman Arcadia Co Ltd, Malaiwana Park Development Co Ltd, United Developers Corporation Ltd and Three Dolphins Resort Co Ltd.

The titles, which were to be reviewed by an audit committee, have yet to be revoked, the Gazette confirmed last week.

Mr Damrong explained to the Gazette that he understood that his and other investigations into the legitimacy of land documents totaling trillions of baht worth of investment is shaking investors confidence in the island.

“I pity the investors who have spent billions of baht for the land,” he said. “But how can a luxury building be completely surrounded by national park land? How is that even possible?”

“I do realize that some of these people are the fifth or sixth owners of the properties. The documents were issued more than 30 years ago, and the officers who signed off on the documents might already be dead, as could be the original owners.

“The current owners are victims.”

Nonetheless, he pointed out that it was impossible for a luxury building to be inside a national park.

“The best we can do is to get everything taken care of properly, so that investors further down the line won’t have to face the same concerns as those who are now in illegal possession of national park land.”