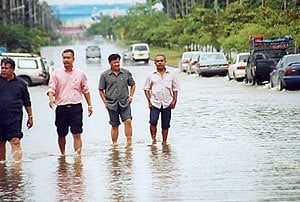 THALANG: Local government officials today rolled up their pants and inspected flooding on the island’s main artery, Thepkrasattri Rd, that was as much as 30 cm deep in places. Thalang District Chief Kanthee Silapa, Phuket Provincial Highways Office (PPHO) Chief Visute Maiwattana and local tambon leaders waded down the middle of the south-bound carriageway, past flooded houses and a gas station, while vehicles surfed slowly by. After his watery walkabout north of Thalang, K. Kanthee explained that new houses built along the road had blocked the natural drainage of water off the road. He added, “We will be bringing in an excavator to enlarge the drain alongside the road as a temporary measure. “In the longer term,” he said, “we are discussing the possibility of buying a piece of private land that is for sale between the houses, and digging a channel through it so that the water can escape.” If a suitable price for the land could be agreed, he added, the work could be completed in a few months. K. Visute said that the PPHO would also raise the surface of the flooded section of the road. However, none of these plans could be finalized without discussions first with the Phuket Irrigation Department, the Provincial Administration Organization and Vice-Governor Pongpow Ketthong.

Fugitive land officials “in the South’