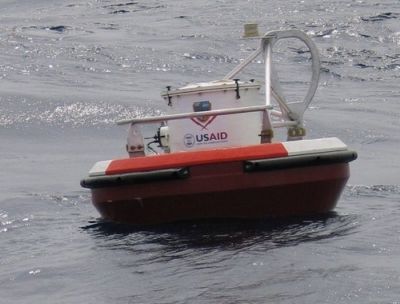 PHUKET: The tsunami detection buoy off Phuket will be replaced “as soon as possible”, the National Disaster Warning Center (NDWC) has said.

NDWC Deputy Director Somsak Khawsuwan told the Gazette the mission will take place as soon as conditions at sea allow.

“We can’t wait until the end of the monsoon season,” he said.

For our previous report on the Deep-ocean Assessment and Reporting of Tsunamis (DART) buoy, click here.

Launched in December 2006, the buoy ceased transmitting data in mid-June this year when its battery finally ran out, the NDWC admitted in July.

According to the US National Oceanic and Atmospheric Administration (NOAA), the buoy is now operating in ’emergency mode’, using a back-up battery that will run out some time this month or the next.

Backed by a 48-million-baht budget, the NDWC has ordered one new DART buoy from the US-based NOAA and has a designated contractor for the replacement mission.

Under the plan, technical experts from the NOAA will help replace the existing buoy with a new unit.

For more on this story see the next issue of the Phuket Gazette, available on September 5.