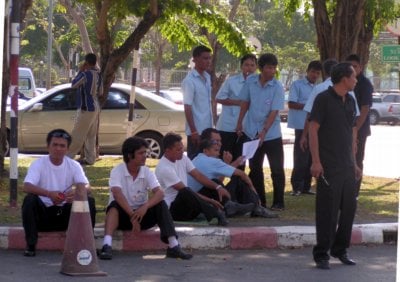 MAI KHAO: While Phuket Mai Khao Company launched its airport limousine and minibus service at Phuket International Airport yesterday morning, some 100 drivers and other staff of the Phuket Limousine and Business Services Cooperative (PBC), which already operates limos and minibuses at the airport, staged a five-hour strike in protest of the new concession.

However, few passengers were inconvenienced as there were few incoming flights during the strike, from 7 am until noon.

The PBC members demanded that Airports of Thailand (AOT) allow the PBC to operate more vehicles under a new concession.

The new service operated by Phuket Mai Khao Co was able to handle most of the passenger load, with the remainder gladly served by the 42 metered taxis that maintain a booth outside the main terminal.

However, the arrival of the new limo operator at the airport offers no relief from high fares because the company is charging the same rates as those offered by the PBC.

Until yesterday, the PBC was the only transport operator allowed to have a booth in the arrivals terminal. Now, both concessionaires are operating almost side-by-side, separated only by a small kiosk.

Somboon Jumpathong, managing director of Phuket Airport Group, which runs the new service through Phuket Mai Khao Co, told the Gazette that his company had won the right to operate 20 cars and 60 vans in a public bidding on December 30.

The company launched yesterday with 16 cars and 30 vans and is awaiting delivery of more new vehicles to fill its quota, he said.

“About 30% of our drivers are employees. The remainder are drivers who have joined us using their own cars,” he said.

He added that he would not appose any move by AOT to increase the number of vehicles the PBC would be allowed to operate.

“If the PBC is allowed the same number of vehicles [150] they were formerly allowed to operate, it would not be a problem for us. Business means competition, so we will just do our best and play by the rules,” he said.

The PBC’s former quota of 110 cars and 40 vans was to be slashed to 90 cars when the new service went into operation – yesterday.

The AOT slashed the number of vehicles the PBC was allowed to operate following many widely-publicized customer complaints that PBC limousine drivers were speeding, and that its minivan operators were stopping on the bypass road where passengers were routinely forced to wait while being pestered by touts pushing a variety of goods and services – hotel reservations, package tours, etc.

The PBC claimed that the latter practice ended in August last year with the launch of separate minivan services for Phuket City and destinations along the southwest coast, along with a promise by the PBC to punish any drivers who continued the abuse.

However, PBC President Niphon Piromrit told the Gazette that the strike was prompted by AOT’s refusal to give a clear answer as to whether the PBC’s quota would be returned to 150 vehicles, as requested.

“We just want our quota back at 150, but the AOT still insists on limiting us to just 90 cars. As for the complaints, we are now in the process of improving our services, but it seems the AOT doesn’t care about that,” K. Niphon said.

He added that he felt sorry the AOT did not care about the welfare of the PBC drivers. All PBC drivers own their vehicles and are subject to high co-op membership fees in order to pay concession fees, K. Niphon said, adding that under the concession that ended on June 30 last year, the PBC paid AOT about 1.2 million baht a month.

The PBC has yet to sign the new agreement and has been working under a verbal agreement since then, paying AOT 877,000 baht monthly.

“Yesterday we talked to the authorities of PIA, but no one could give us an answer. They said they had to wait for an answer from the AOT board in Bangkok. We are just local people who have formed a group together. We are not rich. Some of our members still have to work to pay [car] lease payments,” he said.

K. Niphon said that he is expecting a call from Bangkok. In the meantime, the PBC would continue to operate all 150 vehicles as usual, in order not to inconvenience tourists, he said.