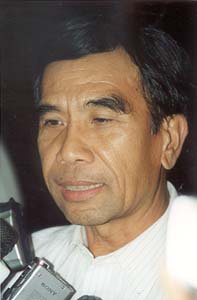 PHUKET TOWN: Developing Phuket further as an attractive destination for tourists and solving the island’s chronic shortage of water are two top priorities, the Governor CEO-in-waiting, Udomsak Usawarangkura, told his first media conference yesterday. K. Udomsak, who will take over from Pongpayome Vasaputi on October 1, said the controlled expansion of Phuket Town was a third vital concern. The Department of Public Works and Town & Country Planning had the task of developing Phuket Town’s expansion in a sensible way, he said. The project required cooperation from various organizations and was “a challenge for Phuket as a tourism destination.” As a Governor CEO on probation for the first six months, he said he rated the water shortage as an issue that needed a quick resolution, along with the land titles scandal that has cast doubts over the validity of some Phuket land papers. The campaign against “people of influence” who had amassed wealth without apparent legal means was government policy and would continue, he said.