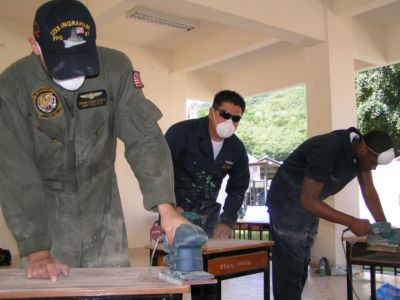 PHUKET: Three US Navy warships – USS Hopper, USS Ingraham and USS Port Royal – are currently in Phuket, marking the first time that the three have anchored in the same port to give the 900-plus enlisted personnel and officers some well-earned R&R.

While the ships are in port, many of the seamen can be seen around the island, letting loose at some of the tourist attractions. One group of officers, however, donated their time and skills to their host community by taking part in community relations projects, or in Navy-speak, “comrels”.

On April 4, a group of nine officers clad in navy-blue overalls and led by their on-board Southern Baptist Chaplain, Mark Haley, rolled in to Baan Kamala School to begin sanding down and varnishing classroom desks that curious students were bringing down from their classrooms.

“We’ve done about 16 comrels so far,” said Chaplain Haley, adding, “We really just want to bring goodwill as ambassadors of our country.”

The group of volunteers ranged in age and rank, each a specialist in a particular field, including a helicopter pilot who had rooted out a pair of old flying greens for the day of dusty desk work.

They made quick work of sanding down the desks with their power tools while school kids added desks to the “assembly line.”

Yesterday, Chaplain Haley and volunteer crew members pitched in at the Life Home Project, a shelter for orphans, HIV-positive mothers and their children.

This time the volunteers brought a bit more order to the grounds by clearing weeds, trimming hedges and planting fruit trees. They later joined the mothers and their children for snacks.

It’s really good to see these opportunities, and we’re grateful to the Rotary club for their help in co-ordinating this, said Chaplain Haley.

“We are actually on our way home after a long time at sea, but it’s both exciting and important for us to build community relations in the ports we stop at. It’s important for people around the world to know that as individuals, we have the best of intentions and are here to help,” Chaplain Haley added.

“Having experienced the trauma and grief that comes with working in conflict zones, it’s also good to be able to take on this kind of supportive role in the community. It’s very rewarding to know we can make a difference in a positive way,” he said.

The three warships anchored off Makham Bay made for a dramatic backdrop to the tropical vista and Chaplain Haley expressed his confidence in the high-tech defense capabilities the ships can provide for their host country.

At just over 10 years old, the USS Hopper (DDG-70), based at Pearl Harbor, Hawaii, is the youngest of the battleship trio and weighs in at nearly 9,000 tons fully laden. With a length of 154 meters, the ship can carry her compliment of 338 over 4,000 nautical miles at a cruising speed of 20 knots. She can also carry a single SH-60 Sea Hawk helicopter. The Arleigh Burke-class guided missile destroyer sails with the motto Aude et effice (Dare and Do).

The USS Ingraham (FFG-61) is the fourth US Navy vessel named in honor of Capt Duncan Ingraham (1802–1891), whose career in the US Navy began as a midshipman when he was just 10 years old. The Oliver Hazard Perry-class frigate is based at NS Everett, Washington and was launched in 1988.

Sailing by the motto “Heritage of gallantry”, she carries a crew of 236, including pilots for the two Sea Hawk helicopters on board.

The USS Port Royal is also based at Pearl Harbor and is the largest of the three ships, displacing 9,600 tons when fully laden with a crew of 360 and two Sikorsky SH-60 Seahawk LAMPS III helicopters. At 173 meters long, The Port Royal cuts through the water at 30 knots, sailing with the motto “The will to win”.