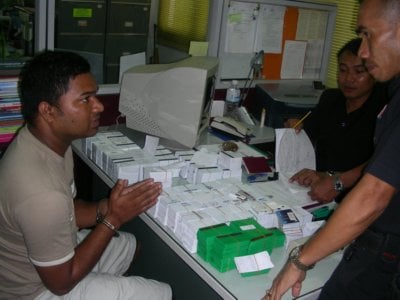 Police suspect the three men may be part of a much larger ring operating in popular tourists areas throughout Thailand and other parts of the world.

Pol Lt Col Boonlert Onklang of the Kathu Police identified the three suspects as Pathmathas Ganeshamoorthy, 26; Srikanthan Veerasingam, 29; and Sivagnanam Gnanakanthan, 35. The passports of all three men revealed that they had been frequent visitors to Thailand.

Col Boonlert said that police arrested Ganeshamoorthy and Veerasingam at the northern end of Thaweewong Rd in Patong early Tuesday evening after a closed-circuit TV camera had caught the pair using a fake credit card to draw money from an ATM machine in front of the Kon Thai Pub in Karon.

At the time of the arrest, one of the men was sitting in a silver-colored Honda car; the other was on the beach.

A search of the vehicle uncovered a notebook computer, 2,703 fake white credit cards and three flash drives. After the arresting officers turned down a 2-million-baht bribe in exchange for their release, the men were questioned, Col Boonlert said.

The two men told police the cards and equipment belonged to Gnanakanthan, who had arrived in Phuket earlier that day, Col Boonlert said.

The men had picked up Gnanakanthan at the airport and dropped him off at his hotel, the Pen Villas in Surin, he added.

A visit to Mr Gnanakanthan’s room just after midnight early on January 3 uncovered an additional 2,533 fake credit cards. Of these, 483 were green and the remainder white. Unlike the cards seized earlier that day, all the cards were were marked with a four-digit number.

All three men were arrested and are now being held in at Kathu Police Station. They were taken to Phuket Provincial Court yesterday afternoon and each was charged with one count of electronic card forgery and one count of possessing a fraudulent electronic card with intent to use.

All three men denied the charges. Bank officers will inspect the cards tomorrow and determine how many of them have been used. It is still too early to estimate the cost of the men’s activities to Phuket businesses, Col Boonlert said.

Police believe the Sri Lankans might have been operating as part of a larger fraud ring, he added.

The cards seized in Phuket were similar to cards seized in earlier raids in Bangkok and Chon Buri. Those cards were encoded with data from genuine credit cards issued in the UK, Col Boonlert said.