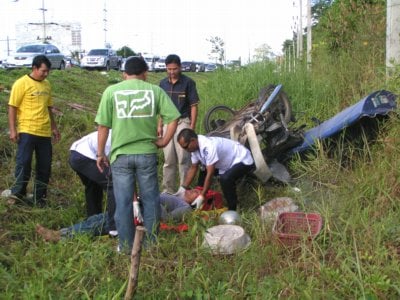 PHUKET: A mobile peanut vendor was seriously injured and a female car driver miraculously escaped harm when their vehicles collided on the Phuket bypass road this morning, sending the vending cart and its owner tumbling into a deep roadside ditch and the car down an embankment on the opposite side of the highway.

When rescue volunteers arrived at the scene about 15 minutes after the accident, the vendor, lying next to his upturned cart, was in  agony and unable to move with what appeared to be severe leg and back injuries. Burning coals smoldered on the ground near the victim’s head as his rescuers secured him in a neck brace and placed him on a stretcher.

The Honda car that collided with the peanut vendor while both vehicles were traveling in the same direction, away from Phuket City, ended up more than 100 meters away on the opposite side of the four-lane divided highway.

Vehicle parts were left in the wake of the car’s path across both roads. According to witnesses, who were amazed when the female driver walked away unhurt, the Honda went out of control at high speed and collided with the vendor.

One witness said that after the collision the Honda swerved across the road, smashed into the central reservation, bounced across the southbound lanes toward oncoming rush-hour traffic, and then careened down the steep embankment outside the Outlet Village shopping center.

There were reports of at least one other accident as a result of tailbacks due to motorists slowing on both sides the road to observe the scene of the accident.

No tsunami warning for Phuket