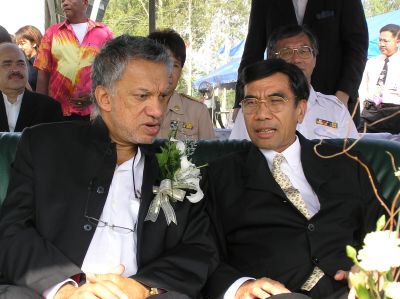 KOH KAEW: The Royal Phuket Marina took its first step toward construction this morning with a ceremonial ground-breaking and the placing of the first stone. Phuket Governor Udomsak Usawarangkura was the guest of honor at the ceremony, presided over by the marina’s president, Gulu Lalvani. Mr Lalvani told the Gazette that he hopes the marina will attract anyone who enjoys boating and tropical living. He believes that, with the recent cancelation of hefty yacht taxes, Phuket will become an even more attractive destination for boat owners. “The Royal Phuket Marina will include an entertainment area with a shopping center, cinema, restaurant, condominium and spa. The total investment will be about 6 billion baht on a piece of land of 180 rai,” Mr Lalvani added. The construction contract has been awarded to K-Tech Construction & Engineering, which has separated construction into two phases. The first phase is scheduled to finish by the end of this year. This will include the completion of 11 Thai-style villas, 120 other housing units, several condominiums, and a marina big enough to hold 200 yachts. The budget for this part of the project is 1.6 billion baht. Sitt Polcharoen, the marina’s General Manager, said that he believes the whole project will be finished within five years. “We have many potential buyers because the marina promises a living situation in which you can moor your yacht in front of your home. When you are ready to leave, your yacht will be only a few steps away,” K. Sitt added. Mr Lalvani originally revealed his plans to build the marina in May 2002, saying that he expected to complete it within a year. The project was later put on hold, with the official reason being given as the need to rethink the concept in light of changing market forces, particularly in the property market.