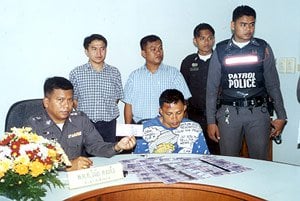 CHERNG TALAY: Police yesterday arrested a 35-year-old Trang man for passing forged 500-baht notes – after rescuing him from a group of local people who were beating him up. The locals told police that the man, Jamnong Longklang, had earlier bought some cigarettes from the JR Mart in Kamala, using a 500-baht note to pay for them. After receiving the cigarettes and his change, Jamnong had climbed in a car and driven away. Shop owner Bancha Kroglek, realizing almost immediately that the note was fake, leaped on his motorbike and gave chase. He caught up when the car stopped at another grocery store in Cherng Talay. Bancha grabbed Jamnong and shouted for help. While some local villagers people punched and kicked Jamnong, others called the police. Bruised and scraped, Jamnong was arrested and taken to Cherng Talay police station where another fake note was found in one of his pockets. K. Bancha confirmed that it was similar to the one Jamnong had given him to pay for the cigarettes. Officers then searched Jamnong’s car and found another 40 forged notes. Jamrong confessed that he had paid 200 baht for each of the notes to a man in Trang. He added that he had already used another 18 fake notes in various places in Phuket. He is now in custody in Kathu police station, awaiting trial. K. Bancha told the Gazette that he realised the note was fake for three reasons: Instead of a watermark the note was embossed with a portrait of HM the King; the metal strip at the other end of the note did not have “500 baht” printed on it; and the paper was not as smooth as that used for a genuine note. The police added that all the fake notes bore either the serial number 9K1160597 or 9K1160600. [The K stands for the Thai character “khor khai”].

Phuket Aquarium to get giant face-lift