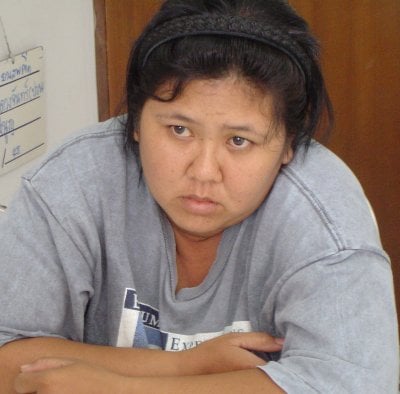 PHUKET CITY: A woman who, in a three-year spree, allegedly robbed at least 15 homes of as much as 570,000 baht apiece, has been caught in a police sting.

The woman, named as Jirapa “Ying” Pasomsub, 34, from Nakhon Sri Thammarat, got into the homes by answering advertisements for a maid. Once in a home she would work for a few hours before disappearing with her swag.

Pol Capt Prawit Engchuan explained that, in order to catch Jirapa, he posted notices around Phuket City on April 12, purportedly seeking a maid.

Many women applied but he rejected all those who did not fit the description given to him by Jirapa’s victims.

On June 3, however, a woman matching the description applied for the job and Capt Prawit videotaped the “job interview”. He then showed photos taken from the video to a number of Jirapa’s victims, who identified her as the culprit.

Three days later, Capt Prawit went to Jirapa’s home in Komarapaj Rd, Phuket City, and “invited” her to come to the police station, where she was confronted by some of the victims and other witnesses, and identified as the perpetrator.

Capt Prawit said that Jirapa admitted to 15 counts of theft: 10 in Phuket City, three in Patong and two in Tung Tong. He added that he was sure there were more. “She started stealing in 2003, taking cash, jewelry, gold ornaments, gems and gold amulets,” he said.

Jirapa, who used a variety of names when pretending to be a maid, including Koy, Noi and Poo, sold the stolen objects to the Jib Heng Luang Gold shop in Tambon Srisoontorn, in Thalang District.

On Monday, Phuket City Police Station Superintendent Col Paween Pongsirin, along with an entourage consisting of the accused, Capt Prawit and other police officers, five of the victims and three members of the press, paid a visit to the gold shop and asked to see all the objects Jirapa had sold.

The owner promptly fetched a variety of items and stressed that she did not know that Jirapa was a thief. “She said she had won the articles gambling. I didn’t think a women could be a thief,” said the gold shop owner, whose name police withheld.

The shop owner added that some items had already been sent to jewelers in Bangkok to be melted down. “The jewelry you can see here is from the past two months,” she said.

Jirapa told the police that she had already spent the profits from the three-year spree but Capt Prawit said he found this difficult to believe. “There was a lot of money – in April alone she stole around one million baht. We will be investigating this further,” he said.

Capt Prawit added that the total Jirpapa was known to have stolen over the three years was estimated to be worth around three million baht.

“Besides this, there are other victims who have not yet identified her [as the culprit], and I have been in touch with other police stations to see whether more victims can be identified,” he said.

One victim was Poolarp Sophontanasir, 25, the owner of Phuket Leasing, a car finance company. He told the Gazette that he and his wife had lost a valuable amulet of Phra Somdej Wat Rakung, three gold rings and two gold necklaces, the total value of which he estimated at more than 570,000 baht.

“We hired her on April 12, and she worked for just four hours before leaving with the valuables,” he explained.

She even took items from the bedroom while he was asleep on the bed, he added. “She may be fat but she knows how to move silently. She’s a real professional,” K. Poolarp said.

Capt Prawit urged all gold shops to be suspicious of people who came to their shop frequently to sell valuables. “Under the law,” he noted, “the owners of gold shops are obliged to ask for the ID cards of sellers and keep a record of them, but the Jib Heng Luang shop didn’t do that.”

Jirapa has been charged with stealing from someone’s home, an offense punishable by up to five years in jail and a fine of up to 10,000 baht.

Local politicians to the rescue