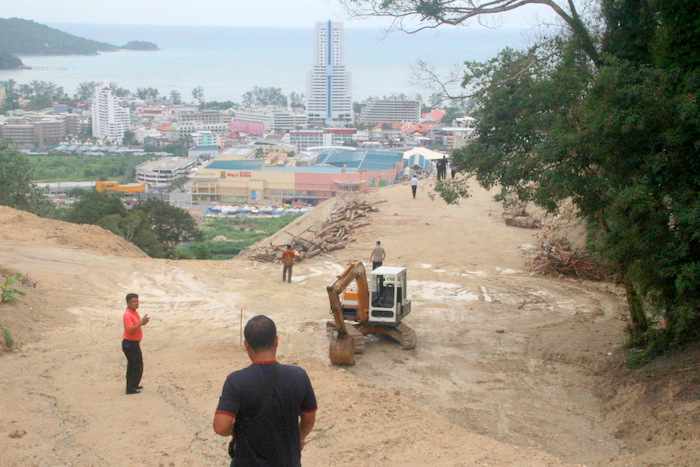 PHUKET: Work was ordered to stop at a construction site high on the hills overlooking Patong yesterday after it was found to be above the legal limit for building – and amid fears of a landslide smothering the residents below.

Phuket Vice Governor Somkiet Sangkaosuttirak led an inspection of the site – eight rai of land with unobstructed views of Patong Bay – armed with a cease and desist order issued by Patong Municipality.

The order was issued after residents in Baan Mon, at the base of the hill, filed a complaint with the Damrongtham Center (ombudsman’s office) last week.

“The residents are concerned that the construction may cause a landslide,” Vice Governor Somkiet said.

A subsequent investigation revealed that the owner of the land had a NorSor 3 Gor land deed for the site, but had been denied a building permit by the Patong Municipality, he explained.

“Patong officials issued a cease work order on July 22. The site is more than 120 meters above sea level, far above the 80-meter limit, and no construction is permitted on land with a gradient of 35 degrees,” V/Gov Somkiet said.

No workers were at the site when V/Gov Somkiet and his team of officials, including Kathu District Chief Sayan Chanachaiwong, arrived.

“We will call the land owner, Pakanan Daowattakij, to ask why the construction was going ahead despite being ordered to stop on July 22,” the vice governor said.

“We will also order him to shore up the banks of earth to make sure there will not be a landslide. If there is a disaster, we will hold him responsible.”

Residents who live at the base of the hills in Patong have good cause to fear landslides, which have become a near-annual phenomenon during the southwest monsoon rains.

Witsanu Yidsua was lucky to survive a landslide that came crashing through his family home in 2011 (story here).

On June 4 this year, three women were killed and one was injured in a landslide near Khao Khat Viewpoint in Wichit (story here).

Regarding a seemingly completed resort sitting abandoned on the plot next to the one inspected yesterday, V/Gov Somkiet ordered the Patong Municipality to report to him in writing within 15 days explaining precisely why it had been allowed to be built.

Phuket’s Club Med to cough up public land, but will stay

United ready for Van Gaal lift off but dangers lurk