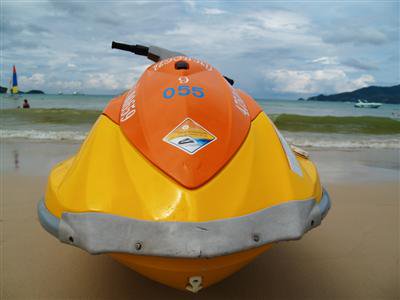 PHUKET CITY: The majority of jet-ski operators on the island have applied for compulsory insurance, but five operators are holding out against the new regulation.

The rule was put in place after foreign diplomats complained that their nationals were being ripped off by jet-ski operators who insisted they pay for damages they never caused, or inflated costs for actual damages.

The scam made international headlines after one jet-ski operator allegedly threatened a group of British military personnel on shore leave in Patong.

The incident was subsequently reported in the local and international media, sparking debate about the safety of Phuket as a tourist destination.

“I will have to ask them to come and talk to me about this before we proceed with legal charges…This is a provincial policy that all jet-ski operators must follow,” Gov Wichai said.

Working in the jet-ski rental industry is also a job class foreigners cannot be involved in, he reminded the operators.

The reason is to inform the public that with the insurance scheme in place there is no longer any reason to worry about being extorted by jet-ski operators.