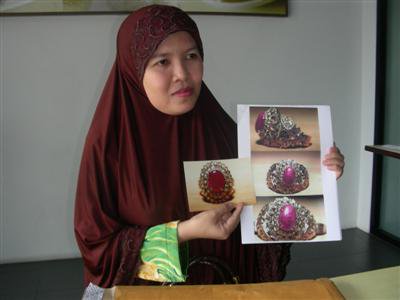 PHUKET CITY: Pattani-native Rozita Hazan, who owns a busy restaurant in front of Phuket Rajabhat University, is hoping to sell a pair of family heirlooms, passed down through five generations, for a little more than 89 million baht.

K. Rozita aims to find a new home for her ring and bracelet, but rather than adhering to a regular auction she has her sights set on something a bit more royal.

She told a press conference at a coffee shop in Phuket City on Tuesday that a distant relative of hers was given the ring and bracelet by the Pattani royal family (at a time before Pattani lost its independence to the Siamese) as a gesture of appreciation for her work as the family’s maid and cook.

Both the ring and bracelet are more than 200 yeas old, she said.

The asking price for the two items is 89 million and 1 baht. “The price has meaning,” said K. Rozita.

“Number 8 represents the age of our king, while his reign is the ninth generation of the Chakkri dynasty and number 1 is because there is only one king.”

The royal motive runs deeper than the price, however. K. Rozita said that although she has already had several offers, she is keeping her options open because she wants to make sure that the heirlooms go to the right person. Such impressive jewelry, said K. Rozita, should ideally be bestowed upon a princess or, failing that, a duchess.

K. Rozita first came to Phuket 10 years ago to study before going on to work at Phuket Fantasea. She now lives in Phuket City with her husband and three children.

A representative from the School Of Gemological Sciences (Thailand) has confirmed that the two gold pieces are encrusted with genuine diamonds and a ruby on each one. The ruby embedded in the bracelet is a mammoth 7.55 carats, while each of the 51 diamonds on the bracelet is 0.44 carats. The weight of the ring’s stones are impossible to assess accurately given the way the stones have been set in the ring.

Concerned about the possibility of bickering in the future, K. Rozita said that she wants to sell the ring and bracelet to avoid conflict between her descendants.

While 30% of the jewelry’s value will go to her family, K. Rozita said that the rest will be donated to charity.

“[The money will go] possibly  to help people in southern Thailand affected by the violence, or perhaps to help fund projects initiated by His Majesty King Bhumibol Adulyadej. I am also considering the Thai Red Cross and other charities,” she added.