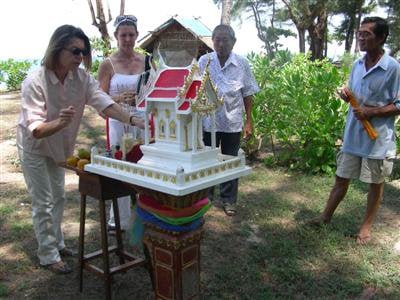 MAI KHAO: About 50 people gathered at Mai Khao Beach this morning to attend a memorial service for slain Swedish tourist Hanna Backlund, who would have been 27 yesterday.

Akkaradej “Chon” Tankae, 31, has confessed to stabbing Miss Backlund to death on the morning March 15, less than 500 meters from the Mai Khao Bungalows where she had been staying with a friend.

Akkaradej, arrested in Ranong on March 19 after several days on the run, told police he stabbed Miss Backlund multiple times after she fought back during his unsuccessful attempt to rape her.

The service, which started at 11am, was organized by Cherng Talay resident Christy Sweet.

“I am not connected to the case in any way, but thought that it was important to do something to mark the one week anniversary of Hanna Backlund’s death,” said Christy, a US citizen.

“The girls were staying in a tent because we had no vacant bungalows when they arrived. After a few days one became free, but they decided to stay in their tent because they enjoyed the location’s privacy. It is a very sad case, they were nice girls,” he said.

Also attending the service was Consul Silvia Jurich from the Swedish Consulate in Phuket.

“It is horrendous for a young woman to meet her death like this. It’s incredible that no one heard her screams. It just goes to show that you cannot just assume that you are safe,” said Miss Jurich before placing incense sticks before a spirit house set up on the beach for the service.