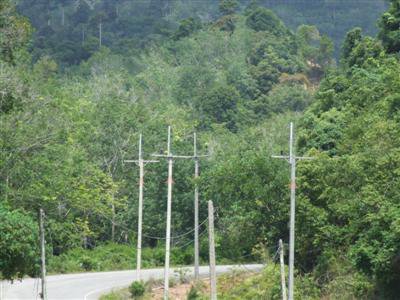 Gov Wichai told a press conference at Phuket Provincial Hall earlier this week that the ever-increasing number of cars on Phuket’s roads makes expansion of the island road network a necessity.

The first project would be a new road from Chalong to Patong, connecting the road to Wat Luangpoh Supha in Chalong with 50 Pi Road, off Nanai Road in Patong.

The project has been talked about for years, but the Forest Department has thus far denied permission to cut a five-kilometer stretch of road though “Zone C” forest land needed to make the connection.

Gov Wichai said he will cite increasing traffic congestion and the need to reduce the number of road accidents in urging the Forest Department to authorize the construction, which would take pressure off the treacherous Patong Hill road.

The second project would be a second north-south artery connecting the airport to Koh Kaew. The proposed roadway, needed to ease traffic along Thepkrasattri Rd, would not require the expropriation of any private sector land as it would be built on state land where high-tension electric power poles already stand.

The Electricity Generating Authority of Thailand (EGAT) has already been contacted about the possibility of using the land under its control to construct the new roadway.

The project is already under study by that agency, Gov Wichai said.

One private landowner has already agreed to donate to the state land that would be needed to expand the width of the proposed roadway to nine meters in one area, he added.

The third project, a road connecting Sakdidet Rd to Saphan Hin, has also been on hold for five years as it requires permission from the Forest Department to complete a 600-meter stretch of road across protected mangrove forest.

Gov Wichai said he will urge the Cabinet to reconsider the project, which is needed to ease traffic congestion along Sakdidet Rd in Wichit and in Phuket City.

The fourth project would be an overpass at the Darasamuth School junction on the bypass road, near Central Festival Phuket.

The overpass could be made of steel, similar to the Thai-Belgium overpass in Bangkok, as this construction method is faster and less expensive than using concrete, he said.

The project would not create an eyesore as the elevation would hardly stand out amidst Phuket’s undulating terrain, Gov Wichai said.

The Governor has already spoken to Phuket’s members of parliament and senators and all have agree to push the Cabinet for approval and funding, he said.

Phuket may gain from bullish view on Thai markets