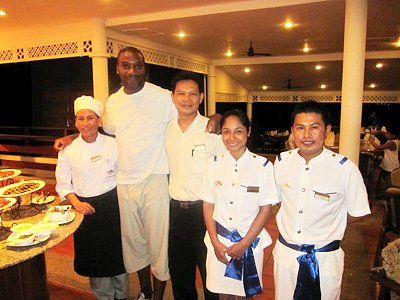 If all goes to plan, he will be escorted through Customs and Immigration at Phuket International Airport, finally leaving the island on a 3pm flight to Bangkok.

From there, he will fly home to the UK, thus ending a saga that has intrigued the British and local press for months – and angered many.

The last time Mr Burrowes tried to leave the country, he ended up in an altercation with a female Immigration official, missed his non-refundable flight home, and ended up spending three weeks in Phuket Prison before he was released on bail.

The period of incarceration cost him his job, his home and three months of his life while his case was mired in the Thai criminal justice system.

One Thai gentleman wanted to show Burrowes a better side to Thailand. Acting through an intermediary, Guest Relations Manager Tim Laven of the Cape Panwa Hotel, he offered to pay for Burrowes’ ticket home.

Mr Burrowes accepted the offer and was presented with the ticket at the Cape Panwa Hotel on Monday.

Mr Laven said Mr Burrowes’ Thai benefactor “would like to remain anonymous because it’s not from him; it’s from the Thai people that maybe [Burrowes] didn’t get meet while he was here.”

Mr Burrowes said he felt “immensely grateful” to the gentleman, though a little embarrassed that his predicament had forced him to accept someone’s charity.

“I also feel it’s a shame that this country has a system that means people feel they have to put their hands in their own pockets to cover the inadequacies… of the way things are run here,” he said.