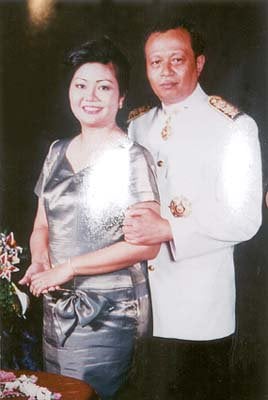 THALANG: Four people have been arrested in connection with the May 5 shooting murders of Prasert and Thavorn Trairat, 67-year-old parents of Thepkrasattri Mayor Prasong Trairat, at their shophouse home in Thalang. One more suspect, identified as the shooter, remains at-large. According to police sources, the hit on the elderly couple was carried out by a team of three hired men: Army Sgt Sorapong Yaodum, Pol Sgt Maj Chalaw Ramduang, formerly of the Sikow District police in Trang, and Suchart Maneesuwan. Police arrested both Sorapong, who later confessed to being the driver, and Suchart, who admitted he went along to identify the victims for the gunman. A warrant has been issued for the arrest of Chalaw, identified by Sorapong and Suchart as the gunman. After confessing to charges of conspiracy to commit murder, the two suspects were taken to the victims’ home to re-enact the crime. Police said the two also alleged that they had been hired to carry out the murders by 40-year-old Wipa Jantong, 40, Chief Administrative Officer of Cherng Talay Municipality, and her husband Sompong Jantong, 51, an engineer with Phuket Town Municipality. On the evening of October 1, officers led by Phuket Provincial Police Deputy Commander Pol Col Apirak Hongtong arrested the pair as they drove along Narisorn Rd in front of the offices of the Phuket Town Municipality. Subsequent searches of the suspects’ house and vehicle uncovered two firearms, one of which was a 9-mm pistol, the same caliber as the weapon used in the slaying. Col Apirak told the Gazette that both have been charged with conspiracy to commit murder and could face capital punishment if proven guilty. The couple have denied the charges and are now being held in custody at Phuket Provincial Court. An initial bail request, placed on behalf of Wipa and Sompong by Phuket Town Municipality Administrator Poonsak Naksenaand and municipal lawyer Kittipol Thammapeerakul, was turned down by police, who opposed bail on the grounds of the violent nature of the crime. The victims’ son, Tambon Thepkrasattri Mayor K. Prasong, told the Gazette that he was confident the police investigation would lead to justice in the case. He alleged that the killings resulted from a conflict between his father and Wipa.