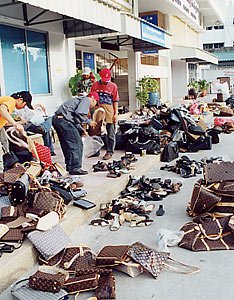 PATONG: Almost 3,000 fake items with a street value of 1 million baht were seized in raids on stalls in Soi Kebsab and Thaweewong Rd on Saturday afternoon. The items, mostly leather goods but also including fake brand-name perfumes, clothes and pirated CDs, were seized in raids on nine stalls. The haul, which filled five police pickup trucks, was taken to Kathu Police Station for destruction. Two vendors, Adisak Kongderm, 20, and Rassame Sridee, 23, were charged with selling imitation goods. They were released on bail of 100,000 baht each. Vendors from the other stalls escaped arrest.