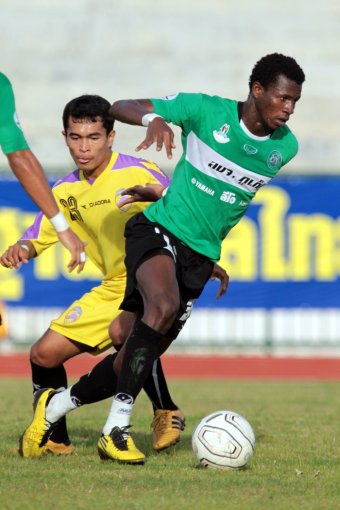 The Southern Sea Kirin had already clinched the league, with 46 points going into the match, but were looking to build confidence for their big home match against Thai Premier League side Osotspa Saraburi FC in the opening round of the 2010 Toyota League Cup on Sunday.

The match will be played at Surakul Stadium starting at 6pm, according to the club’s website.

But despite some good chances early on, it was FC Phuket who drew first blood at 25 minutes when Nakhon Sri Thammarat keeper Thanadech Sriwichai managed to block a shot by Sarach Yooyen, but Phuket FC’s Nene Bi was well-positioned to slot the loose ball into the back of the net; Phuket 1-0.

Nakhon Sri Thammarat tied up the match just before halftime when a shot by Kittipong Sakuna deflected off Phuket defender Ronnachai Jinaket and went into the net.

FC Phuket regained the lead just one minute into the second half, when Thawin Butrsombat outmaneuvered the Nakhon Sri Thammarat keeper in a one-on-one showdown and kicked the ball home. FC Phuket, 2-1.

Nakhon Sri Thammat kept up the pressure but couldn’t convert. FC Phuket added an insurance goal at 75 minutes when a clearance by Thanadech fell into the path of Sarach Yooyen 40 yards out. The teen twisted himself and fired a gorgeous volley into the net to put FC Phuket up 3-1.

The final goal came at 80 minutes after a shot by Thawin Butrsombat shot from 20 years out. Thanadech blocked it, but the ball fell to Camara Hamed, who made no mistake finding the back of the net.

In another Regional League Division 2 South match with playoff implications played over the weekend, second-place Trang FC got a point from a scoreless draw on the road at Surat Thani. The result puts them three points clear of Ranong and Satun United, who are tied for third with 34 points each.

Only the first and second-place teams will qualify for the ‘mini-league’ playoff to decide which four Division 2 sides will be promoted to Division 1.

The twelve teams will divided into two groups of six teams each. After playing home and away matches in a round-robin format, the sides that come out first and second in each group will be promoted to Division 1.

In a scheduling note, FC Phuket’s last home match of the season, against Phang Nga, has been rescheduled to Wednesday, September 8 to accommodate the Toyota League Cup match.

Daily News reported that AIS Regional League Commissioner Wimon Kanchana will travel to Phuket to present the league trophy to FC Phuket players after the match.