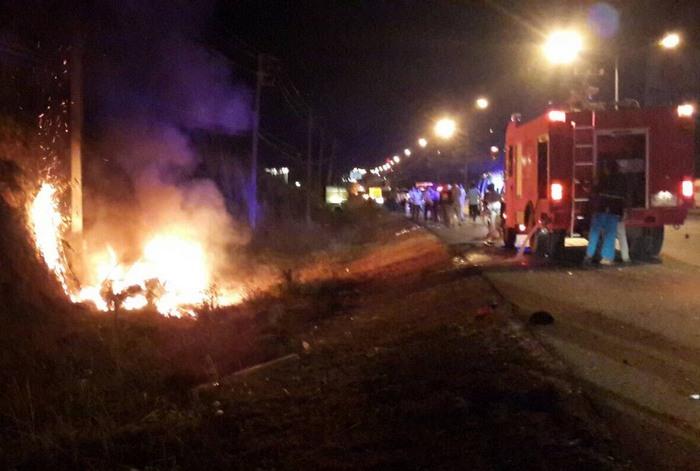 PHUKET: Two people were injured when the driver of a car lost control and hit a power pole on the byapass road near the Premium Outlet mall, resulting in the car catching fire early this morning.

Police found several packs of the anti-anxiety medication Alprazolam littering the road at the scene of the accident and will be questioning Mr Amran and Mr Sulaimarn when they have recovered, said Lt Col Chaleow Taihu of Phuket City Police.

“According to Mr Sulaimarn, Mr Amran was speeding when he lost control of the vehicle and hit a pylon on the side of the road,” said Col Chaleow. “The pylon sparked and started a fire. Mr Sulaimarn tried to open his door to escape the vehicle, before helping Mr Amran exit.”

The occupants escaped the burning vehicle with the help of passing motorists and were taken to Vachira Phuket Hospital.

Mr Amran is being charged with reckless driving and damaging public property. The car was taken to Phuket City Police Station for further examination.

Join the festivities at the last Lighthouse Market of the season