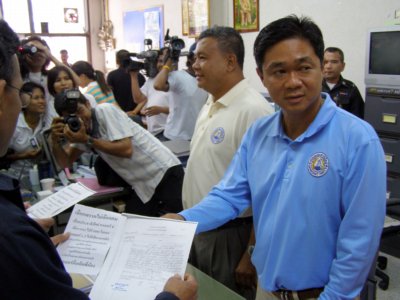 PHUKET CITY: On the eve of the national general election yesterday, Democrat Party MP candidates for Phuket Tossaporn Thepabutr and Rewat Areerob on Saturday handed a petition to the Phuket Election Commission (PEC) complaining that leaflets attacking them have been distributed around the island in violation of election law.

The pair of political hopefuls handed the complaint and a copy of one of the leaflets to PEC Director Supap Akkam after a visit to Phuket City Police station, where they filed a criminal complaint earlier that morning.

PEC Director Supap accepted the complaint, noting that the pair would have to return later to complete more paperwork before the complaint could be forwarded to the Election Commission (EC) in Bangkok, which is authorized to suspend or ban from political activity politicians deemed to have violated election law.

K. Supap said that, if the identities of those behind the leaflets could be revealed, the perpetrators could face punishment under both election and criminal law, depending on the EC’s ruling.

The EC has yet to instruct the PEC to suspend or ban candidates in Phuket, even though it has already received several complaints of breaches of election law involving candidates here, he said.

K. Tossaporn told the Gazette he received a copy of the leaflet 11 pm Friday night.

The leaflets are a violation of Section 53 of the Election Act, which forbids efforts to intentionally discredit a candidate by disseminating wrong information, he said.

Section 101 states that the CEC must first review and rule on the accuracy of the information contained in the leaflet before rendering any decision.

“I need the police and the CEC to find out the facts and learn who is responsible for this, and I need it done quickly. I can’t say who is responsible, but it must be someone who has done it for political gain,” he said.

Despite the leaflets, K. Tossaporn said he was still confident in a favorable result at the polls.