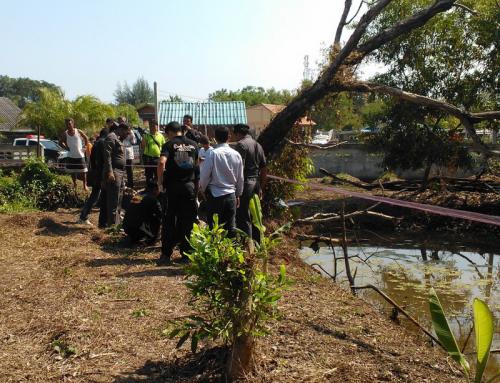 PHUKET: Police believe a conflict over land was the motive for the deadly shooting in Phuket today.

Echa Yala, 49, was shot dead while out in his garden, not far from a lagoon, after having a heated argument with a man who arrived in a white Toyota Fortuner (story here).

“There were two men in the Fortuner. One man walked over to my husband, while the other stood by the car door,” Mr Echa’s wife, Sangwan Nordstocker, told police.

“My husband and the man were arguing about the land. Then the man walked back to the car and came back with a knife to threaten my husband – they continued to argue.

“I could hear the man say, ‘Alright, do you want to have a problem with me?'” she said. “The man walked back to the car again. He started walking toward my husband with a gun, then he shot him.”

“So far, we have been unable to identify the exact type of gun used in the killing, as we haven’t found any shells at the scene yet,” Lt Col Parinya said.

Police are continuing their search for the killer, who was described as a tall, light-skinned Thai with Chinese features.

They are also looking for the vehicle used by the man to flee the scene, a Fortuner with Bangkok license plate number Nor Tor 6571.