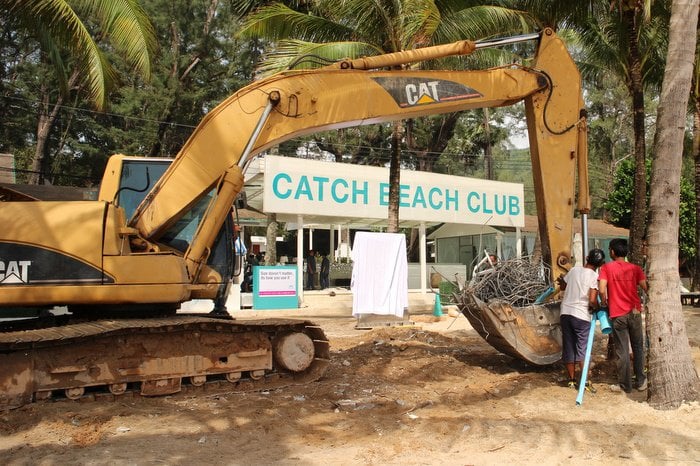 “The deadline to appeal to the Administrative Court is Saturday. We will be going to Surin Beach on Monday to find out whether or not the business owners filed for an appeal,” Mr Ma-ann told the Phuket

The deadline for the 39 Surin Beach businesses to appeal the eviction orders handed down by the Cherng Talay OrBorTor is swiftly approaching. Photo: Thalang District Office

“When we gave them the eviction notices [at the end of March], we gave them 15 days to appeal. They tried to file an appeal with the OrBorTor, but we do not have the authority to make the final legal decision on this matter.

“We have informed them that they would need to instead take their appeal to the court. We gave them an extension until April 18 to do so.”

The notices were handed down on March 19 (story here). The negation of contracts for the use of the buildings, follows the demolishing last year of some of the businesses’ developments on the west side of the boardwalk, which were deemed to be encroaching on public land (story here).

The notices were distributed by Thalang District and Cherng Talay OrBorTor officers to Catch Beach Club and Bimi Beach Club, as well as other businesses on the boardwalk.

Mr Ma-ann told the Gazette that the OrBorTor is only trying to enforce laws already in place.

“The government has ordered us to enforce local laws regarding these cases, which is what we are trying to do with Building Control Act BE 2522 [1979],” he said.

“The National Council for Peace and Order did not order us to demolish these buildings. They are government property, therefore we have no right to demolish them.

“What we can do, however, is make the business operators move out.”

The OrBorTor is carefully preparing documentation and evidence, as well as studying the relevant law, to ensure that they are in the right with how they proceed with the case, Mr Ma-ann noted.