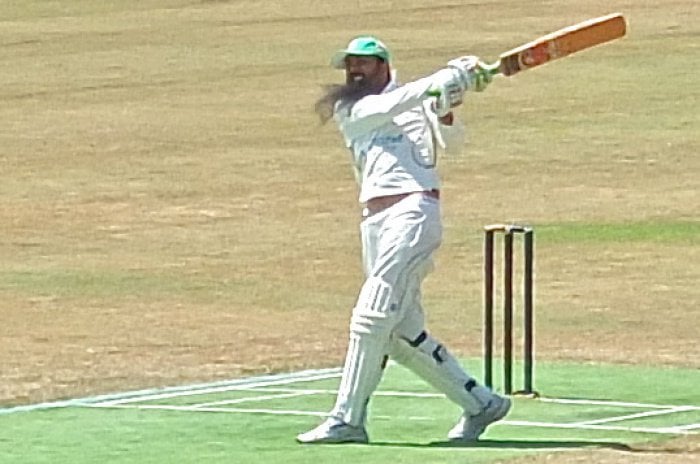 Khan smashed balls back out of the ground as quickly as they were being retrieved, one spectator noted, as Khan amassed a tally of 109 runs from just 64 balls.

Less than one point separated second-placed Laguna and fourth-placed Thalang as they went into battle at the start of the second round of matches last Sunday.

Laguna, coming off the back of a loss against ICC the previous week with an understrength side, were looking to make amends with a full complement of players against Thalang.

Meanwhile, Thalang were looking to avenge their loss to Laguna in the first round, with the winning team guaranteed top of the table.

After winning the toss, Laguna took the unexpected choice of fielding first. Laguna realized the key to their success was removing the opening pair of Andrew Macmillan and Justin Thomatos, who put on a record partnership of 209 runs against them last season.

Laguna managed to strike in the sixth over, removing Macmillan (10) with a sharp slips catch by Stuart Reading off the bowling of Iqbal Malik with the score on 27.

After a bowling change, just before the 10-over drinks break, Laguna also captured Simon Wetherell (3) who mistimed a square cut to hole out at point. This brought Carl Baxter (34) to the crease, who struggled with timing early in his innings against continued tight bowling.

The threat of Thomatos (34) remained, however this was quickly snuffed out when another bowling change was made and Sameer Khan clean bowled him on the very first ball of his spell in the 16th over.

Pao (11) and Baxter put on a stabilizing 30-run partnership, taking Thalang through to the 20-over drinks break without further loss.

However, Pao mistimed a shot in the 22nd over and was caught at mid-wicket. Baxter fell in the 26th over after the introduction of Ali Khan into the bowling attack, being deceived by a slower ball with the score on 118-5.

Laguna then took the ascendancy, capturing the remaining four Thalang wickets for just 10 runs – Thalang were all out for 168 in 38.1 overs.

The steady Youseff worked the ball around, while Khan launched an assault, smashing balls powerfully all over – and outside – the ground in his big-hitting unorthodox style.

Youseff eventually fell in the 12th over with the score on 80 after a solid opening stand.

Manish Sadarangani (37) then combined with Khan to put on a further 104 runs to comfortably secure the first-innings points.

Khan’s innings was not without risk. He was dropped a few times by a uncharacteristicly poor Thalang fielding, but Khan eventually was dismissed in the 29th over with the score on 206-4.

Laguna then continued to accumulate runs with Sameer Khan (40) and Roly Cooper (20) combining for a 34-run partnership, followed by Cooper and Aaron Reading (11) for a further 28-run partnership to take their total for 293-10.

This Sunday, March 1, ICC are matched up against Patong which is expected to be another cracker of a match.