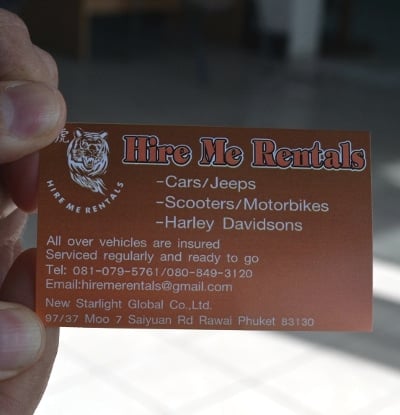 PHUKET: Fugitive British fraud suspect Paul Ridden has been charged with a three-month immigration overstay and faces additional charges for working without a work permit, Phuket Police told the Phuket Gazette this morning.

Mr Ridden, 58, was arrested without incident in front of Chalong Police Station yesterday.

Chalong Police duty officer Boonlert Onklang said a check of the Briton’s travel papers revealed his permit-to-stay expired on May 16.

As complaints against him continue to mount, Mr Ridden will remain in the Chalong Police Station lock-up tonight and be taken to Phuket Provincial Court tomorrow, Lt Col Boonlert added.

A Finnish couple, who asked that their names not be revealed, were among the alleged victims who filed complaints at the station yesterday.

The couple said they arrived in Phuket last week on business and decided to rent a car from Mr Ridden on Sunday to do some sightseeing. They paid a 5,000-baht deposit on the car, which they rented at 1,100 baht per day for two days, they said.

Mr Ridden told the couple he would arrange for someone to return their deposit money this morning, but when they arrived at his jail cell at the police station today Ridden allegedly told them that, “No one wants to help me.”

“I don’t believe him now,” one of the Finns said.

“It’s not our first trip to Phuket, but it was our first time renting a car here. We have heard about the bad reputation of the jet-ski rental industry, but we never thought it would happen in the case of car rental,” he added.

Mr Ridden’s operations were reportedly not limited to car and motorbike rentals. He is also said to have collected property rental deposits.

One woman who telephoned the Gazette this morning said that through her friends alone she knew of up to 250,000 baht in property rental deposits owed to clients by Mr Ridden, whose rental agency “Hire Me Rentals” is based in Saiyuan Road, Rawai.