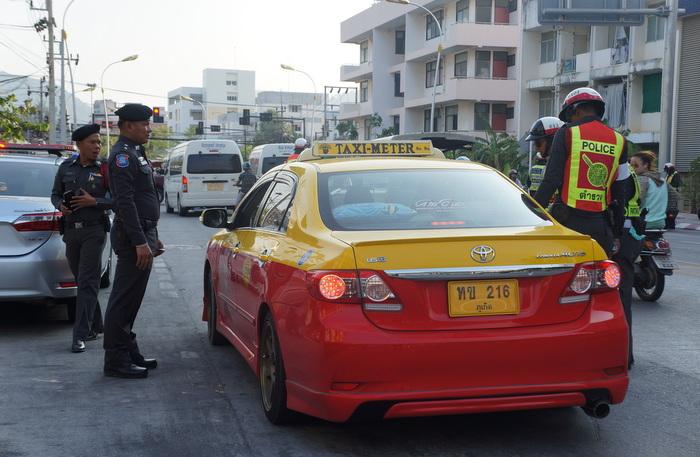 PHUKET: Police have arrested a total of 21 taxi drives at a checkpoint in Patong in the past two days, 19 of whom were fined for being inappropriately dressed.

Patong traffic policeman Ekkarat Plaiduang and Tourist Police Chief Urumporn Koondejsumrit led the checkpoint in front of the Patong Police Station in order to crack down on fixed-price taxi services and ensure that green-plate taxi drivers were dressing appropriately.

“We have been setting up checkpoints randomly, following the policy of Prime Minister Gen Prayut Chan-o-cha and the national police to crack down on taxi drivers who take advantage of tourists and give the country a bad image,” said Maj Urumporn.

Police confirmed that green-plate taxi drivers must dress conservatively and not in shorts and t-shirts (story here).

“Taxi drivers are in very close contact with tourists – either when they are arriving or departing. That’s why it’s important for them to act honestly and courteously, and to dress smartly,” Maj Urumporn explained.

The other two arrested drivers were caught for not turning on their meters.

Meter taxis are registered to only collect fees indicated by their meter, whereas green-plated taxis have a fixed price, as the customers deal with the drivers and receive a voucher to go from one place to another, confirmed Maj Ekkarat.

“All drivers who were caught have been fined according to transportation laws,” Maj Ekkarat said.