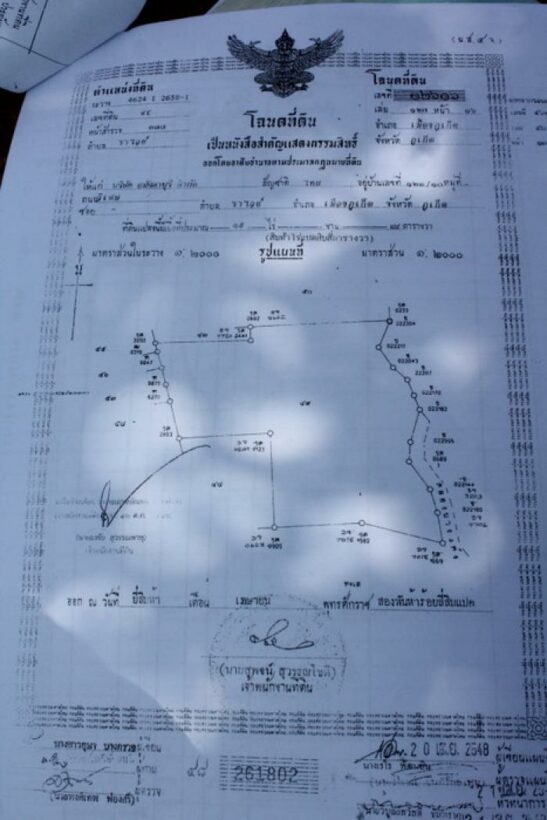 PHUKET: Representatives from Baron World Trade Co Ltd presented a thick set of documents on Wednesday backing their claim to the land that is currently occupied by Rawai sea gypsies in Phuket.

“We have all the necessary legal documents to start the project, which has been approved by relevant government offices,” said Mr Chatree.

Though the sea gypsies claim to have occupied the disputed land for more than 100 years, the Chanote land titles issued to Baron World Trade were dated April 20, 2005.

The company was registered in 1990 with 600 million baht in capital and five directors, including Chalee Sophonpanich, who is the son of Bangkok Bank Chairman Chatri Sophonpanich.

In hopes of garnering favor in the case, sea gypsy representative Nirund Yangpan, 40, and some of his fellow villagers, submitted a letter to the manager of Bangkok Bank, Phuket Branch.

“Once we learned that Mr Chalee was the son of Mr Chatri, we rushed to write a letter and ask for help,” Mr Nirund said. “We need to find a solution based on history and logical thinking, not violence.”

More than 30 people were injured in a violent confrontation between private investors and the sea gypsies after investors called on the help of officials to blockade the area Wednesday.

“At least 100 men came to our village and attacked us. They put up rock blockades to keep us from accessing our village and an area where we perform traditional ceremonies,” Mr Nirund said (story here).

Immediately following the confrontation, sea gypsies made a direct plea to Deputy Prime Minister Admiral Narong Pipatanasai, who was on the island during a tour of the five Andaman provinces (story here).

That evening, Phuket Governor Chamroen Tipayapongtada called both parties to the table to discuss the situation.

“Baron World Trade has legal documents for the land. However, part of the land is overlapping with a 400-meter stretch of road that locals use to access a ceremonial area. They also use the land, which they consider a public area, to fix their fishing equipment,” Phuket Provincial Police Commander Teeraphol Thipjaroen explained at the meeting. “They need to access it, as they cannot walk on the beach during certain times of the day due to the high-tide levels.”

Maj Gen Teeraphol confirmed that a number of complaints regarding the violence on Wednesday were filed at the Chalong Police Station.

Mr Chatree pointed out that the two sides had come to the table to negotiate the situation more than 10 times, and yet each time they failed to find a solution that both parties could agree to.

“We have a right to benefit from our investment in this land, which we legally own. However, locals are not willing to compromise,” Mr Chatree said.

At the end of the two-hour meeting, Governor Chamroen asked that Baron World Trade halt its work on the property and clear the path for the sea gypsies until a final solution was found.

“We will discuss the matter further on February 2,” Gov Chamroen said.