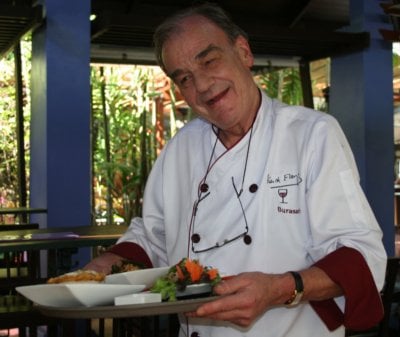 PHUKET: Following reports that 64-year-old British celebrity chef Keith Floyd collapsed with breathing difficulties during a trip to the UK, Burasari Resident Manager Conor O’Leary has confirmed that there is no cause for alarm.

Mr Floyd recently returned to the UK after spending four and a half weeks supervising his brasserie at the Burasari Resort in Patong during the peak of Phuket’s busy tourist season.

He was taking part in celebrations for the re-opening of a Chesters pub, owned by friend Glenn Geldard, in Staffordshire when he collapsed and was rushed to hospital.

“Mr Floyd was working very hard when he was here. He had been extremely busy running the restaurant and organizing gala dinners during that time, so he was very tired,” said Mr O’Leary.

“We’ve spoken to Mr Floyd’s closest friends and he is reported to be fine. There is no cause for concern. Floyd’s Brasserie will continue to operate as usual… Mr Floyd will return six to eight weeks from now,” he added.

Floyd’s Brasserie in Patong opened in March 2007. After an illustrious career as a TV celebrity chef that made Mr Floyd a household name throughout the West, his Patong brasserie is the only Floyd’s branch in the world.