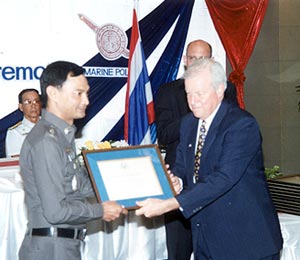 PHUKET TOWN: The United States Ambassador to Thailand, Darryl Johnson, today presented certificates of commendation to the 24 Marine Police and Navy personnel involved in the operation to recover the body of American diver Dr Jeffrey Gall. Dr Gall, an experienced diver with more than 250 logged dives, disappeared on March 25 while exploring an underwater cave off Koh Ha Yai, in Krabi. During the ceremony, Ambassador Johnson read a letter from Dr Gall’s wife, Carol, and their two children, Jocelyn and Brett, in which they stated, “We have written this letter to express our family’s appreciation for an outstanding job.” The family also expressed their gratitude for the officers’ efforts, noting the professionalism of the officers involved and the personal risk they had taken. Before handing out the certificates to each of the men, Ambassador Johnson made a short speech in which he said that no person could be held accountable for Dr Gall’s death, that it was an accident. “This doesn’t mean that diving in the Andaman is dangerous,” he added. Ambassador Johnson and his wife will be in Phuket until July 21.

Gov to hold “clinic’ in Kamala