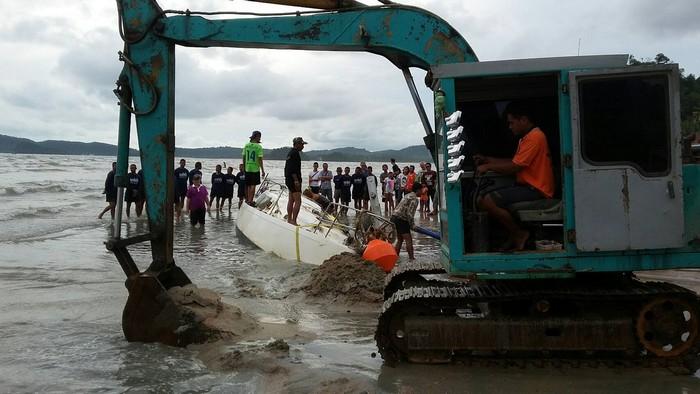 KRABI: Officials and volunteers on Wednesday made another attempt to salvage a yacht that has been grounded at Ao Nang Beach since July 6, after breaking free of its anchoring during a storm. The vessel’s owners, a Russian man and his Ukranian partner, were on the mainland when the boat went adrift.

Alexander Travkin, 31, and Julia Mironova, 29, say the 12-meter yacht was worth about 30 million baht and that they have already lost about a million baht in items aboard that have either disappeared or were destroyed in the storm.

They were anchored about 100 meters from the shore off Ao Nang when they took another boat to the beach at about 6pm, only to return at about 10pm to discover that their floating home had been swept away.

Several attempts to retrieve the yacht over the past two weeks, including use of a backhoe to try to dig the boat out of the sand, have been unsuccessful.

In the 4-hour salvage attempt during high tide, about 50 officials and beach goers chipped in to try again to free the boat from the sand with a backhoe and float the vessel with 30 empty 200-liter barrels.

“The yacht’s keel, which is about 1.4 meters deep, is mired in the sand, preventing us from pulling the boat,” said Nitipat Mongkolpradit, director of the Krabi Rescue Center .

Mr Nitipat could not confirm whether any further attempts would be made by his organization to salvage the stricken vessel.

How much would you pay for a Phuket pineapple?