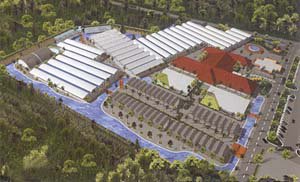 CHALONG: A 150-million baht retail complex incorporating 700 shops is to open on 40 rai close to Chalong Circle, on the Kata road, around the end of the year. It will be called the Phuket Legend Plaza Center. Atthawut Tangpradapkul, President of Eat and Art Management, told a media conference at the Royal Phuket City Hotel today that the company had faith in Phuket’s rapid-growth future as a tourist destination. Despite the Iraq war and the Sudden Acute Respiratory Syndrome (Sars) virus scare, construction will start on the project next month. As well as 700 shops, the two-level plaza will include a music hall with seating for 2,000 people and the Legends Center, an exhibition highlighting Phuket’s history. The shops are expected to build on the government One Tambon, One Product scheme by offering handicrafts, artwork and souvenirs from all over the country. The plaza is expected to open before 2004 and attract 5,000 visitors a day. Similar projects are planned for other regional centers if the Phuket project succeeds as anticipated. Earlier this month, Eat and Art Management opened a 30-million baht Eating Plaza in Bangkok’s Sukhumvit Soi 101/1. Shop leases will be available for bookings from May 25. For more information, contact Eat and Art at Tel: 02-7477759-60 or 076-281056.

Gov prepares for meeting with PM