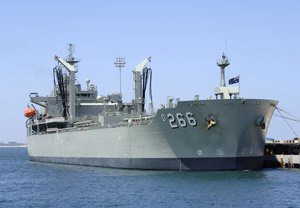 PATONG, PHUKET: Royal Australian Navy fleet replenishment vessel HMAS Sirius, with a complement of 70 officers and crew, is anchored off Patong for a five-day stay. The ship has been at sea for the past seven months.

On Tuesday, the ship’s captain, Commander John Cowan, paid a visit to Phuket governor Wichai Phraisa-ngop, where he told the assembled press, “We are so happy after seven months at sea to be on dry land again.”

He noted that Phuket is “very different from our home” and commended the “beautiful beaches and green scenery”.

The commander also expressed surprise at Patong’s rapid recovery from devastation wrought by the 2004 tsunami – and critiqued the local cuisine: “I’ve tasted Thai food in Australia many times, but I had some here yesterday evening – it is much more flavorful.”

To avoid culture clash between Thais and seamen on shore-leave, the Sirius’s crew was briefed on Thai manners and warned to be “as polite and understanding as possible.”

The latter warning comes as a video-taped dispute between visiting British Royal Navy Marines and a jet-ski vendor at Patong that received considerable media attention worldwide continues to poison Thailand’s image in its chief tourist markets.

Alleged rip-offs of Australian tourists led the Australian prime minister, Kevin Rudd, to demand an official inquiry from the Thais.

Said Gov Wichai: “This visit helps promote Phuket abroad as a tourist destination.” Noting that the seamen “bring us money”, he pleaded with businessmen and vendors not to cheat them, adding that: “If one person is cheated, it will be assumed [by the foreigners] that all are being cheated.”

After leaving Phuket tomorrow, the Sirius heads to Singapore for a two-week stay and then home to Australia.

Commissioned in 2006 after being laid down at South Korea’s Hyundai Mipo Dockyard, the 25,000-ton, 628-foot ship was designed as a commercial tanker named MT Delos, completed in April 2004.

Two months later, the Australian government bought the vessel and converted it to its present configuration.

The ship is named after the first convict transport to Australia during the 1780s.

It is based at Perth.