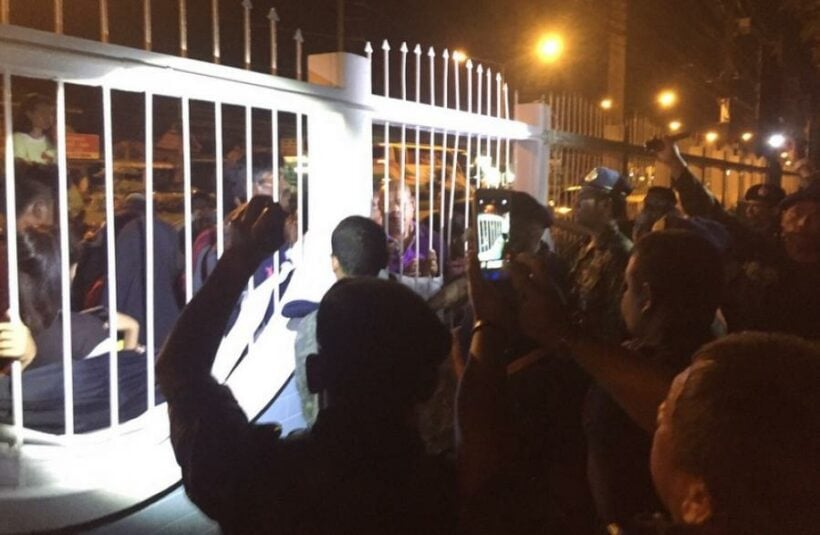 PHUKET: Baan Thasak locals on Wednesday gathered in front of Thalang District Office to demand justice for a mentally disabled man who was allegedly attacked by police officers during a drug arrest earlier that day.

About 50 locals gathered at the scene and demanded that the arresting officers be held responsible for what they did.

On Wednesday evening, civil defense volunteers had set up a drug testing checkpoint in Thalang. According to relatives of the victim, an officer first stopped 20-year-old Asadawuth Angkara and tested him for drugs. The test was positive, so the officer went to his home to check for drugs.

“They found a pill of ya bah (methamphetamine) at his house, but the suspect’s father, Somsak Angkara, 50, told them that the pill was his. Both were taken to the district office for further legal processing. However, during this time, officers attacked and injured them,” the victim’s relatives alleged.

Phuket City Police officers were asked to intervene to help calm the mob. Thalang District Chief Vikrom Jakthee then went to negotiate with the group and advised them to file a formal complaint if they felt that injustice had been done.

“Contrary to what the protesters claimed, officers at the scene told me that they were taking the two suspects to the district office when their relatives blocked the way. The protesters attacked the officers and threw stones at them, injuring them in the process. So, the officers retaliated in order to protect themselves,” said Mr Vikrom.

The two suspects are now being held at the rehabilitation center.

The protesters claimed that they had an incriminating video clip which they would present as part of the evidence against the arresting officers.

The officers, in turn, insisted that they had followed the law and would file a counter complaint for defamation under to the Computer Crimes Act.